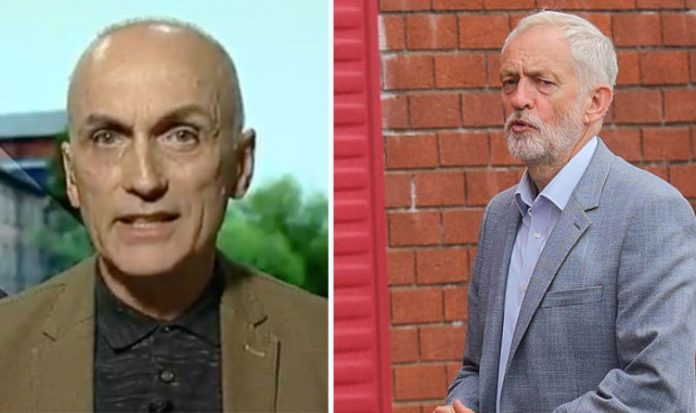 Chris Williamson, Labour MP for Derby North, appeared on BBC Newsnight in an attempt to defend the Labour leader’s laying of a wreath apparently close to a memorial for members of the Black September terrorist group.

Black September were the masterminds behind to 1972 massacre at the Munich Olympics, which saw 11 members of the Israeli Olympic team and one German police officer murdered.

Mr Williamson was questioned on the issue by Mr Davis during the interview.

Mr Davis asked: “A wreath was laid by your party leader at the graves of four members of Black September, true or false?

“Jeremy was there to lay a wreath,” Mr Williamson replied, subverting the question.

“That is why this fuss goes on.”

Giving the politician another opportunity to defend Mr Corbyn’s actions, he asked: “Is it true or false that he laid a wreath by the graves or on the graves of four members of Black September?

“The problem is it seems very odd to lay a wreath on this bit if the people you’re commemorating are over there.”

Jeremy Corbyn has found himself embroiled in a scandal since photos of him appearing to lay a wreath at the ceremony resurfaced earlier this week.

The Labour leader has bizarrely admitted he was at a ceremony which commemorated the death of certain Black September members in 1992, but said: “I was present, I don’t think I was actually involved in it.”

Mr Corbyn has avoided questions about his attendance throughout the week, as Mr Davis pointed out.

The presenter said: “He hasn’t answered the question.”

The MP responded again saying Corbyn was there to commemorate the victims of airstrikes.

He said: “He was there to lay a wreath for the Palestinian victims of the Israeli airstrike on the PLO headquarters in Tunisa at the invitation of the Tunisian president.”

MPs from across the political spectrum have been outraged by Mr Corbyn’s presence at the site.

Labour MP Luciana Berger instructed her leader to apologise, tweeting: “Being ‘present’ is the same as being involved.

“When I attend a memorial, my presence alone, whether I lay a wreath or not, demonstrates my association & support.

“There can also never be a ‘fitting memorial’ for terrorists. Where is the apology?”