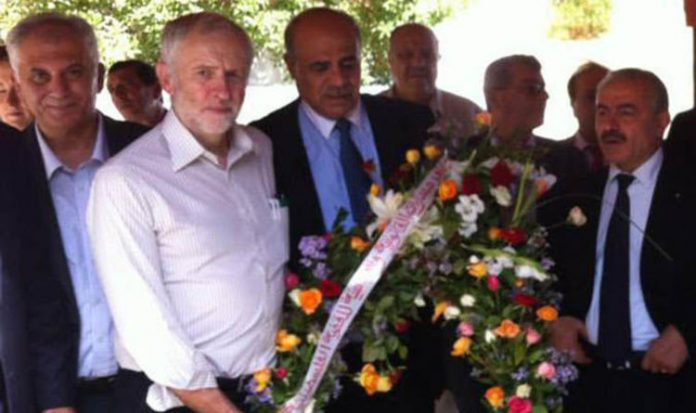 he move came as a fresh blow in the crisis engulfing his leader- ship following the revelation of his presence at a ceremony honouring the memory of Muslim extremists linked to the 1972 Munich Olympics massacre.

Eleven Israeli athletes and a west German police officer were taken hostage in the Olympic Village and murdered by members of the Palestinian terrorist group Black September.

As the row deepened yesterday, Mr Corbyn admitted for the first time that he did lay a wreath at the Palestinian Martyrs Cemetery in Tunisia.

He said in a TV interview: “I was there when the wreaths were laid. That’s pretty obvious.

“There were many others there who were witness to that. I witnessed many other people laying many other wreaths,” he said, a day after being ridiculed for claiming: “I don’t think I was involved.”

But he continued to maintain he sought only to honour those killed in an Israeli bombing raid on PlO headquarters in Tunisia in 1985.

He added: “I laid one wreath along with many other people in memory of all those who died in the awful attack in 1985, which I keep repeating and you seem not to understand was condemned by the whole world.”

He refused to express regret in the face of growing criticism from backbench labour MPs, Jewish groups and even Israeli prime minister Benjamin Netanyahu.

“I’m not apologising for being there at all,” Mr Corbyn said.

“yesterday he admitted being at the commemoration – but said he didn’t think he was involved in laying a wreath.

“Today he says he did lay a wreath, but can’t say exactly where.

“It’s time for Corbyn to finally come clean on his role in this shocking affair.” Mr Corbyn visited the cemetery during an international conference hosted by the president of Tunisia at the end of September 2014.

His flights, two nights’ hotel accommodation and other expenses were paid for by the Tunisian government, but he did not declare the trip in Parliament’s register of MPs’ Interests.

Aides insisted the total cost of the labour leader’s trip was under the £660 threshold set out in parliamentary rules requiring declaration.

Yet Tory peer lord Sheikh, who also attended the conference in Tunisia although he did not visit the cemetery, did declare the trip.

Stephen Silverman, director of investigations and enforcement for the Campaign Against Anti- Semitism yesterday said: “The public needs to know who paid for Jeremy Corbyn’s trip to honour the anti-Semitic Black September terrorists.

“He has a track record of receiving donations from people with close links to terrorist organisations and extremists, and if he received funds which he has not declared for this trip then that needs to be investigated.”

In a letter to the Parliamentary Commissioner for Standards, Mr Bridgen he wrote that the trip “raises the question of whether

Mr Corbyn breached the Code of Conduct”, adding that he had “demonstrably failed” the test of openness set by it.