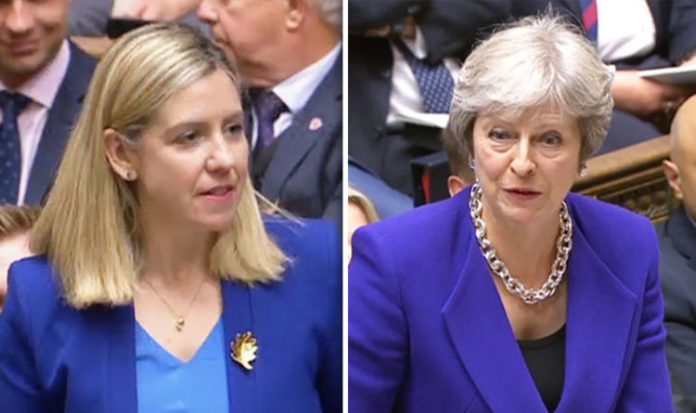 Brexit supporter Andrea Jenkyns sparked huge groans and jeers in the House of Commons after she asked Prime Minister Theresa May when her policy had changed to wanting to “remain” in the EU.

The Prime Minister swiftly replied claiming at “absolutely no point” had her policy changed to wanting to “remain.”

The Conservative MP for Morley and Outwood, said: “Can the Prime Minister inform the House, at was point it was decided that Brexit means Remain?”

Some members of the House of Commons jeered the response with others opting to groan in the chamber.

Theresa May replied: “Can I say to my honourable friend, at absolutely no point because Brexit continues to mean Brexit.”

Ms Jenkyns responded by shouting out “I hope so” as the Prime Minister continued to answer her answer.

Mrs May added: “If I can say to my honourable friend, I know that she wants us to talk about the positives of Brexit.

“I agree with her we should be talking about the positive future for this country.

“I understand that she has also criticised me for looking for a solution that is workable.

“I have to say disagree with her on that. I think what we need is a solution that is going to work for the United Kingdom, ensure we leave the European Union, and embrace that bright future that we both agree.”

On Tuesday, Ms Jenkyns claimed it was time for a “new Prime Minister” who believes in Brexit.

“Somebody who really believes in the cause and bang that drum and to provide a positive vision really. I feel that is, unfortunately, lacking at the moment.

“On the backbenches, it is very frustrating, I have always been a loyal Conservative. I have never voted against the Government, but there are an increasing number of us that are getting frustrated. And we feel that we are not delivering Brexit.”

On Tuesday evening the Prime Minister fought off the threat of the UK being locked into a customs union after Brexit.

The Government won a crucial amendment by a small majority of six votes after a vote of 307 to 301, emerged.