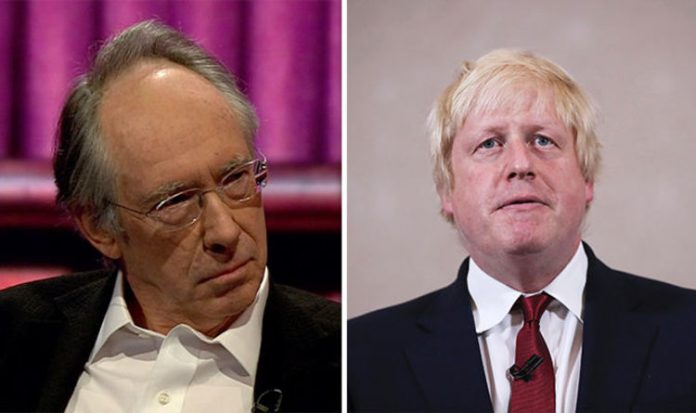 Speaking to BBC Newsnight, bestseller Ian McEwan told Evan Davis: “I’m almost all burka-ed out, I have to say.”

Mr McEwan suggested the current conversations around the burka are not discussions of free speech, but have deeper political repercussions.

He said: “If this was a simple matter of free speech then it would be simple: some mockery, come criticism, we’ve got to take all that.

Former Foreign Secretary Boris Johnson sparked a mixed reaction last week when he made controversial comments about women who wear the burka and niqab.

Writing in the Daily Telegraph, the MP described women who wear the Islamic dress as looking like “letter boxes” and “bank robbers”.

He has faced calls to apologise from across the political spectrum, including from Prime Minister Theresa May.

But the former minister was praised by some for his criticism of the garment, including by Jacob Rees-Mogg.

His own father, Stanley Johnson, also wrote a response article in the same newspaper saying his son hadn’t gone far enough with his comments.

Mr McEwan suggested he was not a fan of the burka or its representations, but stated he did not think the issue was worth the current furore.

He said: “I’m very faintly depressed when I pass someone dressed head to foot in a burka, but on the other hand, I think they represent such a tiny fraction of the adult population, that I don’t think we should be going to war about it.

“If I was challenged I would say: well, since the early 19th Century, since Mary Wollstonecraft, women have had a slow struggle to get themselves into the public space, and the burka would seem to be a denial of it.

“But this denial is coming from so few people that I don’t quite grasp what the heat and light of this is about unless we’re talking about rabble rousing and some versions of populism.”

Mr McEwan has spoken about religion on several occasions in the past, and told the BBC presenter he thinks secularism is the best approach a society should have.

The author said: “We haven’t banned the burka and I’m very glad about that, there are mosques up and down the land.

“I would like to see the core of this as being the best guarantee of religious freedom and religious tolerance should be a well-organised secular state.

“The courts and the state should take no views on the existence of God, no view at all.”