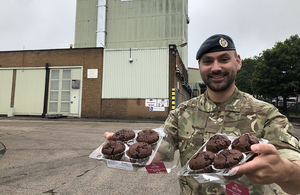 Yeadon-based Danny Railton is an RAF Reservist and an account manager for Speedibake, a food company that produces muffins and doughnuts for supermarkets. Danny spent two years in the Marines in his twenties and after a period as a civilian, he missed the focus that being part of the military brought to his life. Danny’s brother James, aged 30, from Hull, also joined up at the same time as Danny and serves with him in 609 Squadron.

I learned so much from my time in the Marines, it not only brought me a whole new skillset, it gave me a focus and commitment that really served me well when I moved into a civilian career.

I joined the RAF because it’s a very professional set-up and I wanted to be in an environment which offer lots of new challenges and learning opportunities. I’m massively into physical fitness and the military training gives me an extra outlet for that.

Danny, who lives with his partner Kate, is full of praise for his employer Bradford-based Speedibake, who have supported his role in the reserves, including offering additional paid leave, allowing Danny to attend annual training camps.

Stuart Allen, Danny’s manager at Speedibake recognises the benefits being a Reservist offers;

At Speedibake we are very keen to support our employees in achieving a work/life balance so that they can pursue their passions.

We’re really proud to be able to support Danny so that he can devote the time he needs to his military training. A lot of skills gained in his training and operations are transferable to our workplace, such as team-work and problem-solving and we are delighted to be in a position to enable Danny’s participation with the RAF.