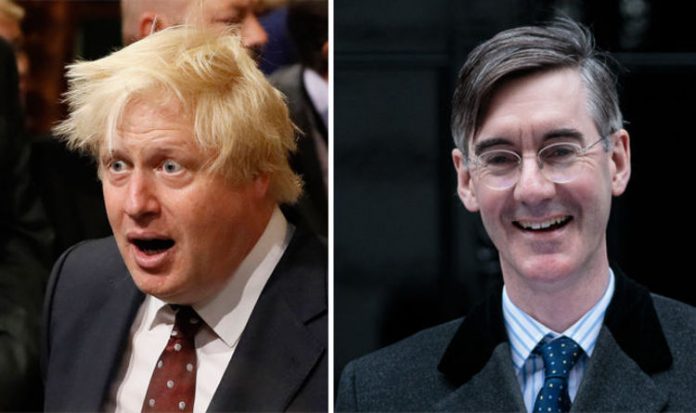 Jacob Rees-Mogg has written in The Daily Telegraph, responding to the backlash against Mr Johnson’s comments about people who wear the burka, which were made in the same newspaper earlier this week.

In Monday’s article, the former Foreign Secretary compared women who wear veils to “bank robbers” and accused them of looking like “letter boxes”.

Mr Rees-Mogg has labelled the outrage in the Tory party as “dubious” and accused his fellow members of trying to undermine a popular member of the party.

The MP for North East Somerset wrote in the newspaper: “The howls of outrage are suspect and the motivations dubious,” over the criticisms of Boris.

“Why would senior Conservatives want to attack so popular a figure for saying something that had been said before, and which they had not objected to?”

Mr Rees-Mogg highlighted Ken Clarke, former Cabinet minister, had previously made comments about women who wear the burka, having referred to the garments as “a kind of bag”.

He thinks the attacks are instead as a result of the Uxbridge MP’s popularity with the general public: “Could it be that there is a nervousness that a once and probably future leadership contender is becoming too popular and needs to be stopped?”

He continues: “Boris Johnson, because of his many successes, popularity with voters and charisma, attracts more than his fair share of this disagreeable vice.”

The former London Mayor had been one of the driving forces in the Brexit campaign, convincing 52 percent of people to opt to leave the Brussels bloc.

However, he decided not to run after fellow Brexiteer Michael Gove launched his own bid.

Mr Rees-Mogg thinks the party’s response has only served to generate more sympathy for the controversial politician.

He said: “This may explain the attempt to use the Conservative Party’s disciplinary procedures, but it has been handled so ham-fistedly that it brings only sympathy and support for Mr Johnson.”

Many high-profile Tories have called on Mr Johnson to apologise, including the Prime Minister.

Dominic Grieve, leader of the Commons Tory rebels over Brexit has even said he would resign membership of the party if Mr Johnson ever did become leader.