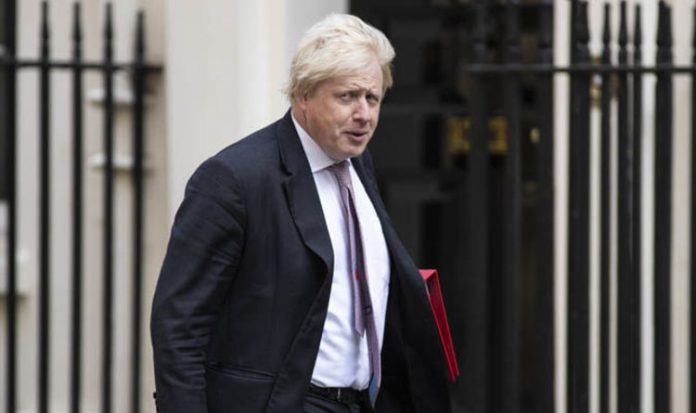 Party chairman Brandon Lewis faces growing fury in party ranks and even calls from senior figures to resign over his handling of the affair which started with him demanding an apology from Mr Johnson and could now see the popular former minister summoned to a disciplinary hearing.

There was speculation today the party could send Mr Johnson for  “diversity training” rather than face harsher punishment, to defuse the row if he is found to have broken its code of conduct on fostering “respect and tolerance”.

Britain’s equality watchdog waded into the row, meanwhile, accusing Mr Johnson of using “inflammatory and divisive” language as part of an article in which he was arguing against banning the burka.

Comic Mr Atkinson is a long time defender of the right to offend and insult.

He wrote to The Times newspaper:  “As a lifelong beneficiary of the freedom to make jokes about religion, I do think that Boris Johnson’s joke about wearers of the burka resembling letter boxes is a pretty good one.

“All jokes about religion cause offence, so it’s pointless apologising for them.

“You should really only apologise for a bad joke. On that basis, no apology is required.”

Former Tory leader Iain Duncan Smith told the BBC: “My general view is I don’t think that an internal party system should be there to shut down MPs when they speak.”

Another Conservative former Cabinet minister told the Daily Express: “The party’s Code is a legal process that must be conducted fairly and confidentially in accordance with natural justice.

“With his briefing, leaking and off-the-record chats with other MPs, Brandon Lewis has made a mockery of the whole system.

“His reckless behaviour means the process cannot now be independent or fair.

“This attack on Boris must be abandoned before more harm is done to our party by the party chairman – and Lewis needs to consider his own position given his disastrous role in this fiasco.”

Complaints to the party about Mr Johnson are to be considered and could lead to a fullscale inquiry by a special panel.

But Mr Johnson’s critics got fresh ammunition when the Equality and Human Rights Commission delivered a damning verdict on his choice of language.

Chief executive Rebecca Hilsenrath said in a statement: “The effectiveness of our democratic society depends on freedom of expression and the expression of offensive and intolerant opinions is generally not unlawful.

“Boris Johnson’s use of language in this instance, which risks dehumanising and vilifying Muslim women, is inflammatory and divisive.

“Political figures should lead by example, conducting debates in a responsible manner and language such as this can inhibit legitimate dialogue.”

The watchdog can investigate if there was evidence someone was denied a service on the basis of a “protected characteristic” such as religion or race.

But there is no evidence of this having happened although Mr Johnson wrote that if a woman came to his MP’s surgery with her face covered he would “feel entitled” to ask her to remove it.

The burka covers the whole face including the eyes but is also commonly used also for the niqab in which the eyes remain visible.

The Tory leadership took some comfort in an opinion poll showing the party has widened its lead over Labour despite the turmoil over Mr Johnson and also Theresa Mays Brexit plans.

A YouGov survey of 1,675 people found 39 per cent would vote Tory in a general election, up one from two weeks before. Labour support was down three, on 35 per cent.