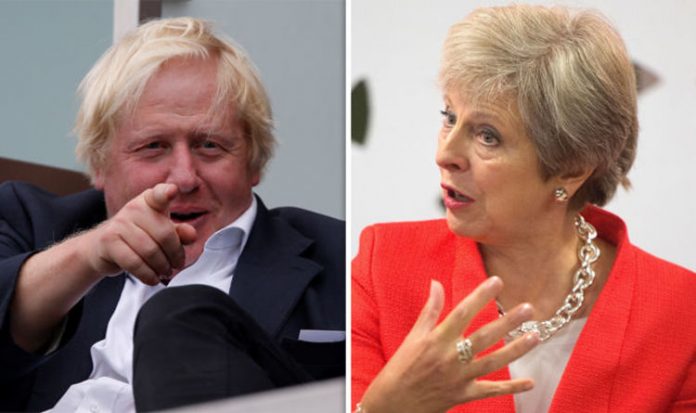 The MPs gave the stark warning last night after Mr Johnson sparked outrage over his Brexit jibe in which he said the Prime Minister had put the UK in a suicide vest and handed the detonator to Brussels.

A senior Tory said 12 or more MPs would refuse to serve under Mr Johnson, which would effectively deprive the Government of a majority.

The MP said: “Boris will never be prime minister – he would split the party.

“There are a large number of us determined to make sure he does not get onto the ballot paper whenever the leadership contest takes place.

“If he did somehow manage to win then there are many of us – well into double figures – who would resign the party whip. He would lose the Government’s majority. He could not govern.”

Writing in The Mail on Sunday, Mr Johnson described the Chequers plan as a humiliation.

He wrote: “We look like a seven-stone weakling being comically bent out of shape by a 500lb gorilla.

“We have opened ourselves to perpetual political blackmail.

“We have wrapped a suicide vest around the British constitution – and handed the detonator to Michel Barnier.”

But chairman of the Commons foreign affairs committee, Tom Tugendhat, said Mr Johnson needed to grow up and his comments were not funny.

The former army officer said: “A suicide bomber murdered many in the courtyard of my office in Helmand.

“The carnage was disgusting, limbs and flesh hanging from trees and bushes.

“Brave men who stopped him killing me and others died in horrific pain. Some need to grow up. Comparing the PM to that isn’t funny.”

Foreign Office minister Alan Duncan served as Mr Johnson’s deputy but yesterday described him as an “irresponsible wrecker” while vowing to stop him becoming party leader.

Tory chairman of the Commons health committee, Sarah Wollaston, also warned publicly that she would resign from the party if Mr Johnson ousted Mrs May.

Mr Johnson’s critics accused him of using disgusting language to distract attention from his private, amid allegations the former Foreign Secretary is divorcing his estranged wife over claims of another affair.

A source told The Sun his wife Marina is looking to move on quickly because she has “had enough”, saying: “The papers are coming imminently. They were due within the next fortnight but Marina’s just had enough.”

But allies of Mr Johnson have hit back and accused Downing Street of a smear campaign with the leak of a “dirty dossier” about his love life.

She said: “Don’t underestimate the vitriol that’ll be directed towards Boris.

“He delivered the Leave vote, Remainers and wannabe future PMs hate him.”