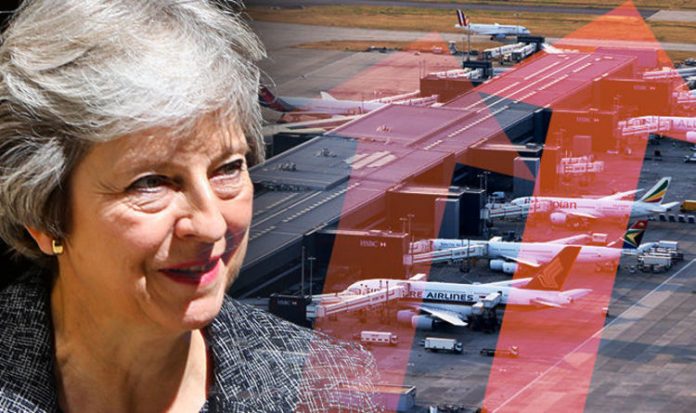 It came amid positive UK economic growth figures, including in particular for the building sector.

“The UK economy continues to thrive and the latest good economic news is that Heathrow airport is absolutely thriving, and that there has been a significant boom in construction output.

“The Remain campaign will say this good news is ‘despite Brexit’.

“Hopefully one day they will get a dose of reality and realise that a many of the good things happening in Britain are because of Brexit and the huge opportunities it offers us as a nation.”

Overall, its terminals experienced “unprecedented peaks” in July, with more than 250,000 passengers travelling through on 19 separate days during the month.

The total of more than 7.8 million travellers using Heathrow in July made it the airport’s 21st record month in a row.

In terms of cargo traffic, the emerging markets of China, Turkey and Brazil saw the fastest growth over the month.

The figures were new evidence the Remain referendum campaign’s warnings that a Brexit vote in 2016 would flatten the economy were ill-founded.

But sceptics also say that a big factor attracting foreign tourists is the steep fall in the value of the pound, meaning their currencies buy more.

The airport meanwhile pleaded for some non-European nationals to be allowed to use self-service e-gates, to ease congestion.

Airlines have also complained that people from outside Europe can routinely wait two hours to get through passport control, more than double the maximum 45 minute target, while European nationals can wait an hour despite a 25-minute target.

“However, too often their first impression of the UK is a long queue for immigration.

“The Home Office should let visitors from low risk countries, such as the US, use the same e-gates as EU visitors to give them a warm welcome to Britain.”

The positive figures for Heathrow usage came as the Office for National Statistics said UK economic growth rebounded between April and June, though growth slowed month-on-month within the quarter.

Warm weather benefited the retail and construction sectors to help Gross Domestic Product grow 0.4 per cent compared to the snowy first quarter of 2018.

The figures included a 0.9 per cent boost in construction output.

The Builders Merchants Federation reported that their average daily sales in June were more than 11 per cent higher than a year before, and total sales in the first six months of this year were 4 per cent up on the same six months of 2017.

Warm weather driving a surge in landscaping projects was a factor.

Separately, the Department for International Trade hailed ONS figures showing British exports of goods and services rising faster than imports for the 11th month in a row.

The overall trade deficit narrowed by £6billion, to £25billion in the year to June, although it widened in the three months to May, partly thanks to a decline in car and plane exports.

International Trade Secretary Dr Liam Fox MP said: “As we open consultations for future trade relationships with key global markets around the world, we’re seeing a shift in the UK where we’re moving towards selling more than we buy, with exports increasing faster than imports.

“My international economic department will continue work with companies across the country to ensure they’re making the most of global opportunities.”