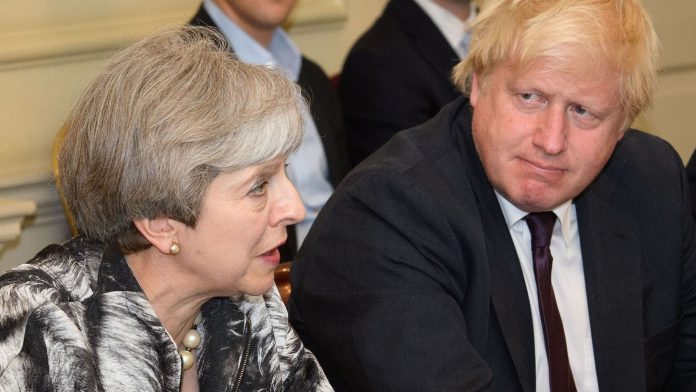 Some MPs believe Boris Johnson can think himself lucky he had already resigned from the cabinet over his opposition to Theresa May’s Chequers deal on Brexit.

They claim that even for the accident-prone former foreign secretary, who has been regularly causing offence with insensitive and offensive comments for nearly 20 years, his burka blunder was a gaffe too far.

And this time, those MPs argue, the prime minister – now tired of his relentless disloyalty – might have done what critics who have no time for Mr Johnson believe she should have done a long time ago: sacked him.

To be fair, speaking in Edinburgh, the PM was pretty firm in her support for her Tory chairman Brandon Lewis who earlier called on Mr Johnson to apologise for his “letter boxes” and “bank robbers” comments.

Interviewed by Sky’s James Matthews, the prime minister agreed that Mr Johnson’s remarks were offensive and said people should have the right to practise their religion and women should be able to choose how they dress.

Mr Johnson, on the back benches now for four weeks since his resignation, can at least no longer embarrass the government with his loose talk or harm the UK’s interests with his diplomatic gaffes, his detractors claim.

But as a backbencher he remains a dangerous opponent and a threat to Theresa May – even more so than when he was in the cabinet. And he is once again favourite among Tory activists to replace her as party leader and prime minister.

He’s also said to be preparing a big move – described by friends as a “significant intervention” – in the run-up to the Tory conference in October. That should set alarm bells ringing in Downing Street and Tory HQ.

His burka comments are unlikely to have changed Tory MPs’ opinions of the former foreign secretary, however.

His supporters regard him as the king over the water, while to his enemies he’s a clown and charlatan unfit for high office.

For instance, interviewed by Kay Burley on Sky News, euro-sceptic MP Andrew Bridgen essentially claimed the row was a deliberate stitch-up by the PC brigade and Remainers like Mr Lewis and Foreign Office minister Alastair Burt to discredit Mr Johnson.

Tory rebel Remainer Heidi Allen, however, responding to reports that Mr Johnson had been accused of “fanning the flames of Islamophobia,” tweeted: “About as suitable to be PM as he was Foreign Secretary.”

Where Mr Johnson has embarrassed the Conservative Party, though, is by re-igniting a row over the Tories and Islamophobia, which only a month or so ago Mr Lewis was vowing to stamp out in the party. No wonder he’s cross with Boris!

And what will also annoy Mr Lewis is that after weeks of sitting back and watching Labour fight a damaging civil war over anti-Semitism, now, suddenly, the Tories are engulfed in their own row and allegations that they are anti-Muslim.

Mr Johnson’s critics say it is time he answered the charges.

In his back catalogue, Mr Johnson has:

Critics have accused him of “dog whistle” Islamophobia and “pandering to the far-right” and pointed out that he has been in contact recently with Steve Bannon, a former Donald Trump strategist.

He will deny that, of course. His friends say it’s ridiculous that his views are being attacked and that debate on difficult issues should not be shut down. But his words will undoubtedly go down well on the hard-right of the Tory party.

It has even been suggested recently that the former prime minister blames Michael Gove more than Mr Johnson for Brexit.

Theresa May has revealed her irritation with him, ridiculing his deal with the Germans while he was London mayor to buy water cannon that were never used and also comparing him to Michael Heseltine’s dead dog.

The only Tory leader who really punished Mr Johnson for an insensitive blunder was Michael Howard, who in 2004 sent him to Liverpool to apologise for accusing the city of “wallowing in grief” over the murder of hostage Ken Bigley.

Mr Howard, as he then was, also sacked Mr Johnson from a frontbench post for lying about an affair. It wasn’t the first time Mr Johnson had been sacked. He was fired from The Times for making up a quote.

Now he’s a backbencher – writing provocative newspaper columns again – and no longer in the cabinet, only the voters of Uxbridge and South Ruislip can sack him now.

His majority was down to just 5,000 in last year’s general election.

And in such an ethnically diverse constituency, his remarks about burkas, “letter boxes” and “bank robbers” are likely to have gone down as badly as they did with the prime minister and Tory chairman.