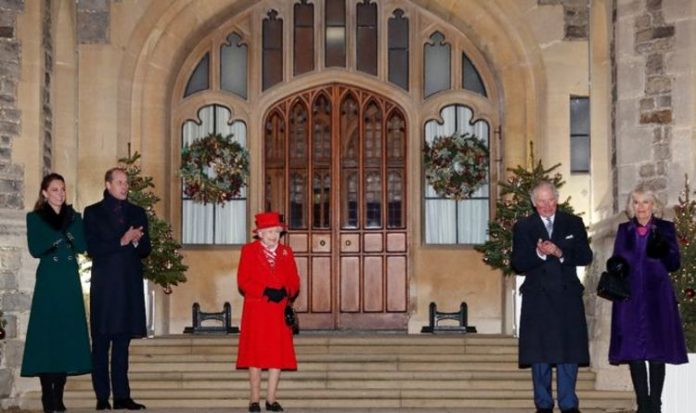 The Duke and Duchess of Cambridge made Windsor Castle the final stop of their 1,250-mile Royal Train journey which paid tribute to volunteers and key workers for their efforts during the pandemic. They were joined at the socially-distanced event by Prince Charles, Camilla, Prince Edward and Sophie, and Princess Anne.

The monarch, who has spent much of this year with Prince Philip at Windsor surrounded by a small bubble of isolating aides, said the music played by a Salvation Army band, was probably the only Christmas carols she would hear this year.

She told Anthony and Gillian Cotterill, leaders for the Salvation Army in the UK and Irish Republic: “Nobody’s allowed to sing anymore.”

She was mouthing some of the words to O Little Town of Bethlehem and Hark the Herald Angels Sing.

But Anne, 70, told her mother: “Oh we can sing outside”, prompting laughter from Charles and Camilla.

It was the biggest gathering of the Royal Family since Remembrance Sunday at the Cenotaph and a rare picture of all eight senior working members of the family together.

The Queen wore a jolly festive red coat and hat by Angela Kelly. Earlier, Kate had worn a similar Catherine Walker scarlet coat with checked scarf while visiting a Bath care home and meeting students at Cardiff Castle but changed to a dark green ensemble to avoid a wardrobe clash.

During the tour Kate wore a colourful range of face masks costing £15 each, some from one of her go-to company for her children’s clothes, London-based Amaia. Yesterday the Cambridges admitted that they were struggling to decide what to do about Christmas.

They told students that they had not settled on where or with who they would spend the festive season.

William said: “It’s so difficult. We are still trying to make plans. It’s difficult to know what to do for the best.”

The couple met undergraduates from Cardiff’s universities at a winter wonderland and food market to hear about the mental health challenges students have faced during the crisis.

They toasted marshallows and took part in a secret Santa session with six student housemates.

Kate, 38, had the group giggling when it emerged she had given Gwennan Lewis, 20, from Newport, a £13.99 Prosecco Pong drinking game.

After the carol concert, the royal party spoke to 20 volunteers representing organisations and charities fromWindsor and Maidenhead.

Suzanne Hull, 49, headteacher at Oakfield First Primary School, met Charles and Camilla. She said: “They were very interested in how schools had coped.” Sarah Cottle, 49, headteacher of three nurseries, spoke to William and Kate. She said afterwards: “It’s been great the Cambridges have done this tour, nice to see them recognising the work schools have done.”

But not everyone was happy. Welsh health minister Vaughan Gething said he was not particularly interested in their trip but would prefer it if “no one was having unnecessary visits”.

No10 said the PM welcomed the “morale boost” their trip brought.