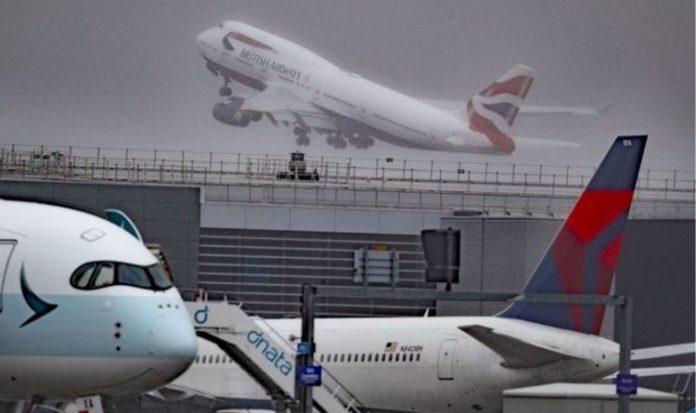 Heathrow chief executive John Holland-Kaye said the airport’s Terminal 4 will remain closed throughout next year as demand for air travel battles to recover from the devastating impact of the coronavirus pandemic. Passenger numbers for November were down 88 percent one the same month last year with just 747,000 people travelling through the airport last month. Terminals 3 and 4 have been closed since April and May respectively, with all flights operating from Terminals 2 and 5.

Mr Holland-Kaye has called on the Government to introduce full business rates relief for all UK airports and abandon its plan to scrap tax-free shopping for international visitors from January 1 to help shore up the struggling aviation sector and related businesses.

He said the tax “will make the UK the only country in Europe not to offer tax-free shopping for international visitors” and claimed it would result in 2,000 retail job losses at Heathrow alone.

He said: “2021 should be the year of Britain’s economic recovery.

“But recent announcements, such as the tourist tax, could be the final nail in the coffin for struggling businesses such restaurants, hotels and theatres that rely on inbound tourists, as well as for retailers.

“To make global Britain a reality, the Government should be helping the aviation sector to survive, to develop routes to our key trading partners, and attract businesses and tourists to come to Britain to spend their money.”

Under the new tax rules being introduced by Rishi Sunak, foreign visitors will no longer be able to benefit from tax-free sales and VAT relief on goods purchased in the UK from January 1.

The Government insists continuing to offer tax-free shopping is too expensive to administer and that retailers who offer the service are putting other high street retailers at a competitive disadvantage.

The Chancellor claims the tax will raise £500 million but critics warn the impact on the tourism industry could lose more money than it brings in.

And trade bodies and retail businesses have all opposed the change with Marks & Spencer, Superdry, Mulberry, Paul Smith, Ted Baker, Charles Tyrwhitt and Hackett writing to the Chancellor to voice their opposition to the new tax rules.

Scottish business leaders have warned the changes represent a “clear and present risk” to tourism and jobs in the UK and have called on Mr Sunak to “urgently reconsider” the decision.

Heathrow lost its place as Europe’s busiest airport for the first time after being overtaken by Paris’s Charles de Gaulle in October.

And to make matters worse the airport is facing strike action by workers over “fire and rehire” plans that have cut the wages of long-serving staff, sparking an increasingly bitter dispute.

A company spokesman said: “IAG Cargo is transporting critical supplies around the world, and like all airlines, has been hit hard financially by the crisis.

“Our offer would see almost half of cargo workers’ salaries rise, with no-one else taking more than a 10 percent pay cut.

“We want to resolve this, and urge the union to get back around the table.”