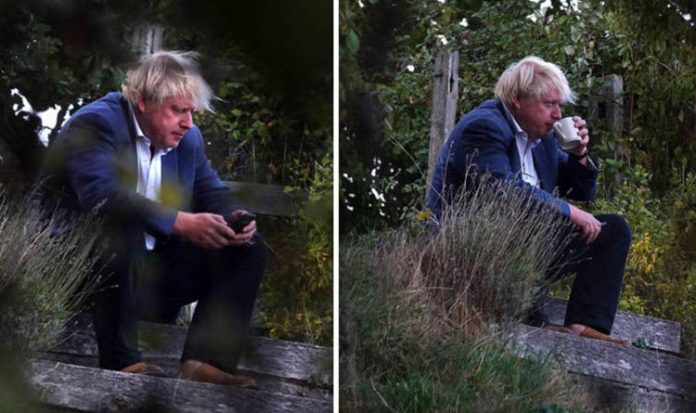 He resorted to the quintessential British pick-me-up – a cup of tea in his garden – as he fiddled with his mobile phone, toying with the prospect that he had lost any hope of making a Tory leadership bid and seeing his marriage collapse around him.

The photos, taken from a public footpath, show Mr Johnson, 54, sitting on garden steps at his home in Thame, Oxfordshire.

They came as details emerged of his relationship with Tory socialite Carrie Symonds who made no secret of their close friendship months before his marriage split.

The vivacious aide shared dates with the married father of four and showed off their lengthy text message exchanges to friends.

Mr Johnson and Miss Symonds, 30, were said to be “inseparable” at one function and giggled together as they left another.

She has worked around Westminster for 10 years and likes to post photos of herself. In one snap she is dancing in shorts on the bonnet of a car in the grounds of Parliament.

One Tory MP said said: “I was at a private get-together for Leavers. Boris arrived with Carrie. They seemed inseparable and spent most of the evening chatting to each other before leaving together. They looked very close.”

Colleagues first noticed the pair at a Tory black-tie fundraising event last February, when they were seen giggling at each other as they left.

Then, over the summer, at a colleague’s wedding, she was showing off lengthy texts from the then foreign secretary.

One guest said the pair had been exchanging messages most of the night and that he sent a car to pick her up at the end of the evening.

In June she is said to have boasted about spending an evening in the Oxfordshire countryside with the Uxbridge and South Ruislip MP. Insiders also believe that on another occasion she was with the former London Mayor at Rules restaurant in Covent Garden.

One said: “It was an intimate meal and hardly anything to do with matters of the state.”

Miss Symonds, who now lives in Mortlake, south-west London, went to exclusive private girls’ school Godolphin and Latymer in west London before taking a degree. Her career began nine years ago as a press officer on the Back Boris campaign for London Mayor.

She became director of communications at Conservative Campaign HQ after last year’s general election, but left amid claims of rows over her links to the Foreign Secretary’s camp. City news firm Bloomberg hired her as a campaign chief and she starts work for them today on a cleaner oceans crusade.

The relationship with Boris emerged after his wife Marina Wheeler, 54, decided to divorce.

One source said: “To say she is angry doesn’t even come close. Marina discovered about Carrie after reading messages on his phone.”