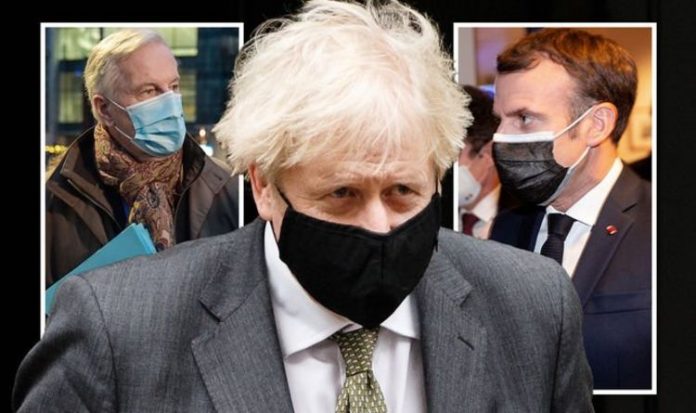 A UK source has claimed Brexit trade talks “still have legs” as the EU and Britain continue to negotiate and secure a deal. This comes despite rapidly growing tension between Brussels and London over fishing rights. EU negotiator Michel Barnier is trying to preserve European fishermen’s access to UK waters, however Prime Minister Boris Johnson wants to ensure British fishermen are prioritised.

The stalemate could lead to no deal, paving the way for the UK to ready gunships in a move that has caused anger in the EU.

Even one of Mr Johnson’s own Tory party colleagues, Tobias Ellwood, condemned the Government over the threat.

The Conservative chair of the Commons Defence Committee, called the threat “irresponsible” while the former EU commissioner Chris Patten accused the Prime Minister of behaving like an “English nationalist”.

Recently, chief executive of the Killybegs Fishermen’s Organisation, Seán O’Donoghue, warned that the tense talks between the EU and UK over fish could result in a repeat of the Cod Wars.

He told the Times “we’ve had the Icelandic Cod Wars in the past” and added that a no deal Brexit “would be similar to that”.

He continued: “If we end up in a no deal scenario, there would be chaos on January 1. The immediate effects would be felt in 24 to 48 hours.

“There would be conflicts, blockades, and there won’t be one EU member state involved, there would be several.

“There would be the Irish navy, and you will have French, Danish and Dutch that all have waters near the UK.”

READ MORE:Brexit fishing panic: Dutch admit ‘we are afraid’ in plea for deal

While the UK has been largely condemned for its use of “gunboat diplomacy”, this isn’t the first time such a threat has been made during the Brexit process.

In August 2018, the French Agriculture Minister Stephane Travert warned that his country’s Navy could be forced to step in during the Scallop Wars between British and French fishermen.

Mr Travert said: “We can’t keep going on like this, we can’t keep having skirmishes like that.

“The French Navy is ready to step in if more clashes break out, as well as carrying out checks.”

The feud centred around British fishermen’s attempts to fish for scallops in France’s waters, angering their French counterparts as they had been prevented from operating between May and October in 2018 due to attempts by their government to preserve shellfish numbers.

A group of around 35 French boats chased the five British vessels hitting them with stones while ramming them.

Britain’s National Federation of Fishermen’s Organisations appealed for calm, saying the dispute should be resolved through talks rather than the escalating violence.

The group said: “We have raised the matter with the British government and asked for protection for our vessels, which are fishing legitimately.

“The deeper issues behind the clashes should be settled by talking around the table, not on the high seas where people could be hurt.”