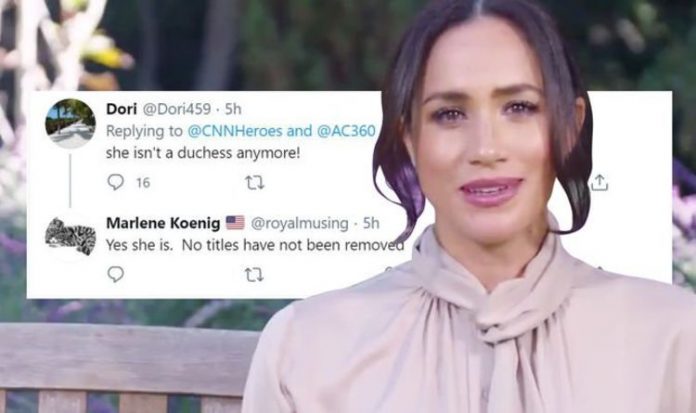 The couple still have HRH styles as it was agreed with the Queen that they would keep them going forward.

Reacting to the tweets questioning Meghan’s royal title on Twitter, expert Marlene Koenig explained: “Yes she is. No titles have not been removed.”

while Meghan and Harry have kept their royal titles they are not meant to use them or the word ‘royal’ in conjunction with their work going forward.

This was one of the Megxit deal terms they agreed with the Queen after announcing their wish to step down last January.

The terms of the Megxit deal will be reviewed by the Queen next spring and there is a chance she could choose to remove Meghan and Harry’s titles altogether.

Ahead of the US election Meghan and Harry prompted outrage from critics by encouraging Americans to vote.

Royal Family members are meant to remain politically neutral and some felt Meghan and Harry had crossed the line by speaking about the upcoming election.

At the time, royal commentator Richard Fitzwilliams addressed whether or not the Queen could strip the couple of their titles entirely.