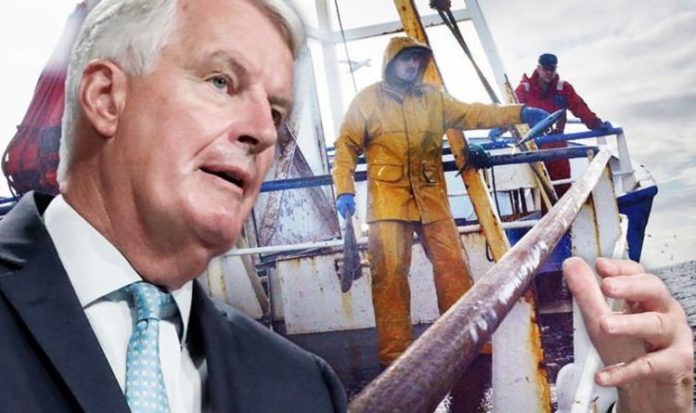 Negotiations between Britain and the EU are on a knife-edge following a warning that there is still a “very, very wide gap” between the sides over the issue of fishing rights. As the talks resumed in Brussels this week, the UK’s chief Brexit negotiator David Frost said: “We’re working very hard to get a deal but there’s quite a lot to do.” Time has almost run out for the differences over future access to British waters, as well as state aid rules and oversight of any agreement, to be resolved.

The two sides are now working on draft legal texts, but crucial sections of the document remain blank.

Europe’s leaders will demand today that the European Commission publish no deal plans amid fears that the talks are dragging on without businesses knowing what they need to prepare for in the worst-case scenario.

The Netherlands, France, Belgium and other frontline countries are worried that businesses and fishing communities will be hit by economic disruption without EU contingency measures.

As tensions are set to rise and the clock ticks down, a leaked EU document sheds light on how Brussels has conducted negotiations since day one, particularly regarding fishing rights.

In 2017, the hopes of British fishermen that the UK could win its “waters back” after Brexit were set back by the European Parliament.

MEPs drafted seven provisions to be included in the withdrawal agreement, including the stipulation that there would have been “no increase to the UK’s share of fishing opportunities for jointly fished stocks [maintaining the existing quota distribution in UK and EU waters]”.

The document added that in order for the UK and EU to keep to commitments on sustainable fishing – contained within the United Nations stocks agreement – “it was difficult to see any alternative to the continued application of the Common Fisheries Policy”.

The CFP was a central part in the Brexit campaign and the majority of British fishermen and people living in coastal towns pushed for Britain to leave the bloc.

The CFP was a central part in the Brexit campaign (Image: GETTY)

But the leaked report from the European Parliament’s committee on fisheries insisted that the “granting of access to the EU domestic market to the UK” post-Brexit should have been conditional on Britain continuing to respect the rights and obligations in the CFP.

The MEPs also wanted EU vessel-owners to continue to be allowed to manage boats under the UK flag.

The Dutch-owned trawler, the Cornelis Vrolijk, reportedly accounts for 23 percent of the English fishing quota.

The document concluded: “The nature of future EU-UK relations in fisheries needs to be seen in relation to the UK’s ambition in keeping close ties with its European partners and the common market …

The paper was originally published in the Guardian.

Barrie Deas, chief executive of the National Federation of Fishermen’s Organisations, said at the time that he understood why the EU would start negotiations with a “hard line” but that he believed there would be radical changes for the industry.

He said: “I understand where they are coming from. It’s quite a hard line to go into a negotiation and we are waiting to see what the UK’s position is. But the reality is that there is a huge imbalance in terms of other member states fishing in UK water.

“There will be change once we leave the European Union. I think the model is the bilateral agreement that Norway has with the EU. But things are going to change.”

The withdrawal agreement signed last year included the provision that the UK would be bound by the CFP until the end of any transition period.

If Britain and the EU end up without an agreement on December 31, the UK fishing industry is likely to hugely benefit from it.

“Economic analysis suggests a reallocation of catches based on the ‘zonal attachment’ principle could raise the value of UK fish landings by 50-60 percent..

“Moreover, such gains would massively outweigh any losses resulting from a rise in EU trade barriers to UK fish and fish products exports.”

He concluded in his piece for Briefings for Britain: “‘No deal’ is therefore a good deal for the UK fishing industry, although there may be scope for a deal with the EU that smooths the transition to a new allocation of catches.”