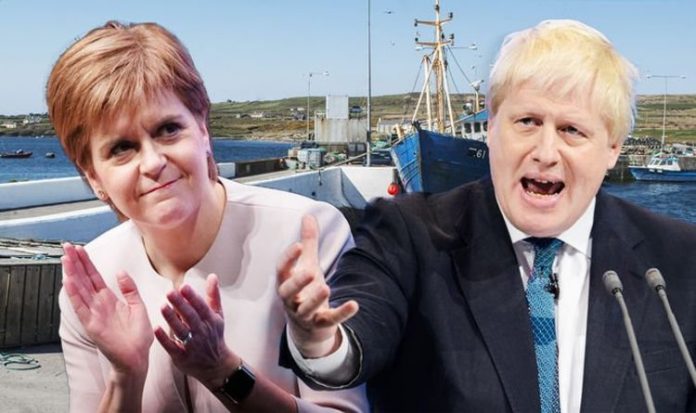 Major disagreements remain on the so-called level playing field, governance of the deal and fishing rights.

Last week, the EU’s chief Brexit negotiator Michel Barnier announced the UK had signalled that it could accept 60 percent of the value of stocks from British seas from January 1, down from the 80 percent London had originally called for.

As the clock ticks down, in an exclusive interview with Express.co.uk, Alan Winters, director of the Trade Policy Observatory at the University of Sussex, claimed that despite Britain fighting tooth and tail to protect its waters, it could all soon go down the drain if Scotland becomes independent.

Scottish First Minister Nicola Sturgeon is planning to hold a second independence referendum in the early part of the next Scottish parliamentary term, following elections to Holyrood in spring 2021.

If the Scottish National Party (SNP) wins a majority, senior figures believe it will give them the mandate to demand a referendum, regardless of what Mr Johnson thinks about it.

Should a second referendum happen and Scotland become independent, most of the waters Boris Johnson is trying to protect from the EU, could end up in the hands of Ms Sturgeon.

Scotland has approximately 60 percent of the seas and coastline of Great Britain.

Professor Waters said: “There is a great irony in the Westminster government fighting to defend fishing rights in waters that we are largely going to end up giving back to the Scots when they pursue independence.

JUST IN: No deal projections are ‘overblown and misleading’

Ahead of the first plebiscite in 2014, Holyrood published a report titled ‘Scotland’s Future and Scottish Fisheries’.

The report reads: “Following a vote for independence, the Scottish Government will enter into negotiations with the rest of the UK and with the EU institutions to fully define our fishing rights and other key issues.

“At present, Scotland’s fishing opportunities are provided for in a concordat among the UK nations, which gives Scotland a share of UK quotas.

“It will be in the interests of both Scotland and the rest of the UK to agree an appropriate and fair set of final allocations so that the normal fishing practices of each nation can continue unaffected.”