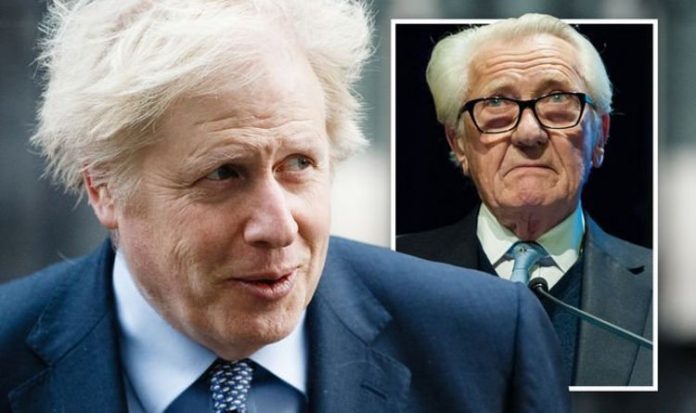 Despite positive moves made last week, UK Government sources now claim that the chances of a Brexit deal are no higher than 50 percent. This comes as President of the European Commission Ursula von der Leyen and Prime Minister Boris Johnson ready themselves to take over with direct talks. The same sticking points that have marred negotiations for months remain: fishing rights, so-called fair play rules and policing any deal.

Many Remainers continue to bang their drum and rubbish Mr Johnson and talk of a deal, including Lord Heseltine, the former Deputy Prime Minister and ardent critic of the Brexit process.

He recently told Sky News in an interview Brexit will “disastrous” for the country.

He said: “The facts are very clear: we are poised on a situation of either no deal or probably quite a flimsy deal governing parts of the economy, and there are no good news stories in this – Brexit is going to be a disaster for this country.”

It is similar rhetoric to what Lord Heseltine has spouted since the country decided to vote to leave the EU in 2016.

And despite his opposition, Lord Heseltine long ago admitted defeat in the face of Brexit, hanging up his gloves last year when he said he was “quitting the fight” of the Remain side.

It has left many confused as to why the politician continues to take aim at the Prime Minister.

In 2019, after Mr Johnson’s landslide election victory, Lord Heseltine, during another Sky News interview, said: “We’ve lost, we have to face up to that, we’re going to leave Europe.

He believed Parliament would vote down the final withdrawal bill in 2019 – which passed in January 2020.

Asked why he believed this, he said: “Two things. One, that public opinion changes – which it hasn’t done yet – and secondly, that Parliament, which is the sovereign body of our country, just hasn’t got the stomach for it, so there will not be a majority for it, and a way will be found to upset the present Article 50 procedure.

“They know perfectly well that we are a major part of the European economy, our economy is totally integrated with them, they are a major supplier, but the interesting thing about those statistics of course is that while 40 percent of our trade goes to Europe – which makes us very dependent – but coming the other way, for any one country within Europe, the figures are dramatically smaller.”

Further, he suggested if the UK did leave the EU – which it did in January – then the young people of the future would simply pressure the Government to ask the EU for reentry.

He claimed: “If you look at the age groups, the elderly voters are pro-Brexit, once you get down in the new voters, the middle ages and below, then they are very anti-Brexit.

“It’s a generational issue and that is not particularly convenient for my party but yes I’m absolutely sure that in future generations the absolute, historic, inescapable fact of our relationship with Europe will bear in.”

Lord Heseltine’s Brexit rebellion got him sacked from his role as Government adviser after demanding a parliamentary vote on the final deal to be written into legislation.

Meanwhile, leaving King’s Cross station for Brussels on Saturday morning, the EU’s chief negotiator, Michel Barnier, told reporters: “We keep calm, as always, and if there is still a way, we will see.”

Ms von der Leyen and Mr Johnson will speak on the phone later this afternoon.