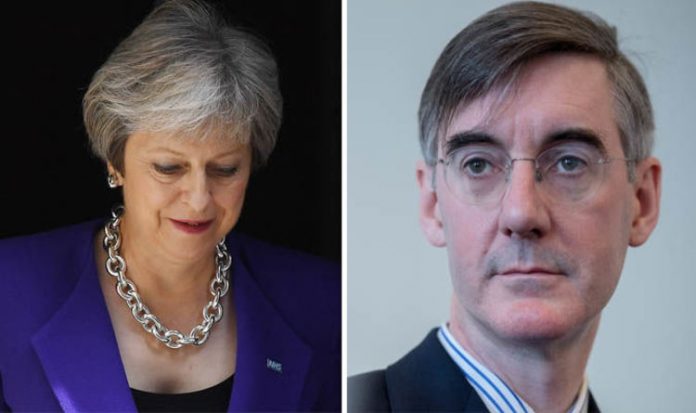 Tory Brexiteer Jacob Rees-Mogg  warned Theresa May he would not consider backing any deal which leaves Leave voters “cheated”.

Speculation is rife Mrs May intends to introduce a “third-way” arrangement to keep the UK inside the single market with the EU, although she downplayed the idea at today’s prime ministers questions (PMQs).

Mrs May will meet her warring Cabinet on Friday for crunch talks at Chequers ahead of a White Paper being published on Monday.

Her proposal is to incorporate a deal already rejected by Brexiteers to let the UK collect tariffs on behalf of the EU for goods being transported to the bloc.

Mr Rees-Mogg told Channel 4 news: ”It’s not for me to issue warnings to the Prime Minister.

“I fully support the Prime Minister, but I cannot guarantee to support a policy that doesn’t deliver on the manifesto commitments.”

Are Rees-Mogg and the Brexiteers strong enough to topple Theresa May?

Momentum against Mrs May’s proposals has been steadily growing in recent hours, with Brexiteers being urged to “show steel” and stand up for Leave voters.

Tory MP Andrea Jenkyns, who quite her ministerial aide post to speak more freely on Brexit, urged ministers to stand up to the prime minister.

She wrote on Twitter: “Cabinet #Brexiters please stand up for the 17.4 million people who voted to leave.

“We are relying on you. We know some of you want to be the future Party Leader.

Her words come mere hours after Mr Rees-Mogg demanded Mrs May to stick to manifesto and not “cheat” the people who voted to leave the EU.

He said: “What is best for the country is sticking for the manifesto so that is the great opportunity and it is also what people voted for.

“Politicians must be honest. It would be a cheat on the British electorate to do that which was not in the manifesto.”

Mr Rees-Mogg warned the change in plans could harm the Tories in the same Sir Robert Peel plunged the party into crisis over trade reforms.

Momentum is growing of a split between minister, with rumours that Foreign Secretary Boris Johnson could quit if Mrs May backslides on Brexit.

What did Theresa May say at Prime Minister’s Questions today?

Mrs May told the Commons during PMQs today her government does intend to leave the single market and customs union.

She said: “This country has a proud and long tradition of welcoming those fleeing persecution and proving them wth the appropriate support.”

She said the country would continue to do so.

However, her proposals could be watered down once she meets with ministers on Friday.