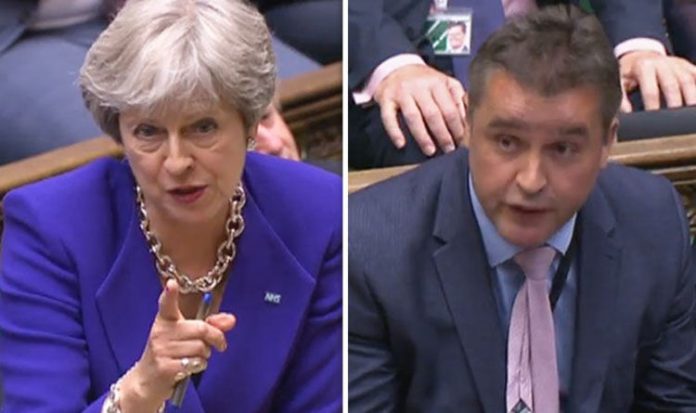 The Prime Minister insisted Britain will regain full control of its waters after Brexit as she took a dig at the SNP.

Speaking during Prime Minister’s Questions, Mr MacNeil asked: “With the Chequers failure Friday on the way and max fac soon giving way for tot cap, or total capitulation, the UK Government’s angle on Brexit has been dithered, dilly and duck.

“Can I give the Prime Minister an opportunity for a straight answer? Shellfish producers in my constituency are worried about giving their produce to the French market and the Spanish market.

“Together with those countries and independent Ireland, of course, how open does the Prime Minister want and envisage the borders and the trade routes to be after Brexit?”

In response, Mrs May said: “I have made very clear that we are committed to no hard border between Northern Ireland and Ireland and to as frictionless border with the European Union in the future as possible.

“But can I also say to the honourable gentleman that I think fishermen up and down the country are welcoming the proposals that my right-honourable friend, the Environment Secretary, has put forward on fisheries policy for the future.

The Prime Minister was cheered by MPs as she hit out at the Scottish National Party’s Brexit policy. She said: “It is this Government that is taking the UK out of the Commons Fisheries Policy.

“The worst policy for fishermen in Scotland would be the SNP’s policy of staying in the CFP.”

Under the EU’s controversial Common Fisheries Policy, which is universally hated by British fishermen, quotas are set centrally by the EU and assigned to each country.

On Wednesday, Environment Secretary Michael Gove set out the UK’s ambitious plan for a new fishing regime as Britain “takes back control” post-Brexit.

The Environment Secretary told BBC Radio 4’s Today programme the UK will become an independent coastal state – insisting Britain will “hold the cards” and be in the “driving seat”.

The blueprint could allow British fishermen to catch more fish after the existing EU system quotas are torn up.

Mr Gove said: “One thing is clear, we will have more fish in our sea’s which are caught by British vessels.”

CEO of the Scottish Fishermen’s Federation Bertie Armstrong insisted the UK fishing industry needed to see a “significant uplift” after cutting ties with the EU.

But Angela Harrison, a partner at Pengelly’s fishmongers in Cornwall, said the British Government does not value the British fishing industry and understand the true potential it has for the country.

Ms Harrison warned a Brexit deal in which Britain remains in the EU’s CFP or closely aligned to the bloc will result in the end of Britain’s fishing industry.