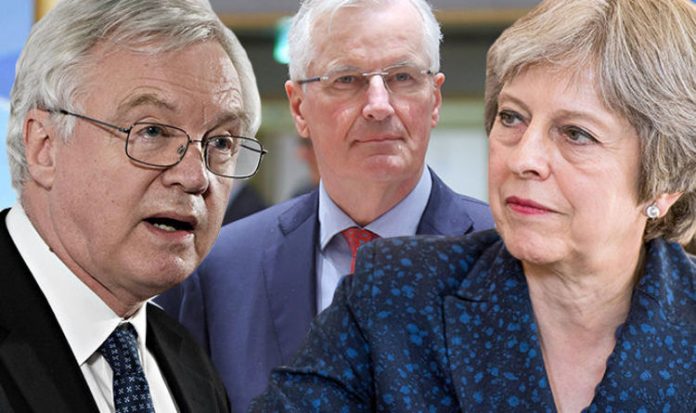 The EU27’s leaders have voiced their concern about the lack of progress made in negotiations over crunch issues, such as the Irish border, and behind closed doors are fearing the Brexit withdrawal agreement will not be concluded by the perceived October deadline.

Many of the Theresa May’s European counterparts are pinning their hopes on the release of Westminster’s white paper and see it as a pivotal stage as negotiations appear to be faltering.

All eyes will be on the Prime Minister as she gathers her divided Cabinet at her countryside retreat Chequers in order to find common ground and hammer out the final details of the UK’s blueprint for a post-Brexit plan.

Eagerly awaiting the Westminster release, EU diplomats have put Brexit on the back burner until further information is available from Britain.

One diplomat revealed there is not much to talk about without the Prime Minister putting a concrete proposal on the table.

Another welcomed the pending release, insisting it is about time that Britain tables a proposal rather than the country’s leaders just outlining positions in speeches.

The source added: “As it stands, a conclusion of the withdrawal agreement in October seems to be less likely than some weeks ago.”

According to one EU official, there are also concerns that Mrs May’s white paper will fail to clear up crucial aspects of the divorce negotiations – including governance and the Irish border backstop.

Michel Barnier, the European Commission’s chief Brexit negotiator, is said to have invited Brexit Secretary David Davis to Brussels for a round of talks, later saying the opportunity was turned down by his British counterpart.

An EU official said Britain had been invited for talks but turned down the offer, insisting they are only available after July 16.

At the recent June European Council summit, Mr Barnier said: “We are waiting for the UK white paper and I hope it will contain workable and realistic proposals.

“But, let me mention once again the time is very short. We want a deal and we are working for a deal, we are ready to invite the UK delegation back next Monday (July 2).”

The UK Government say it is “ready and waiting” to hold more talks with EU negotiators after the white paper is published.

Mrs May has stressed the importance of accelerating the talks ahead of the upcoming October European council summit in Brussels.

Last week, the Prime Minister said: “I have been stressing we want a deal that works for the UK and our European partners and if we work together we can support each others’ prosperity and security.

“We are going to be publishing our white paper shortly, and I want to see the negotiations accelerating and intensifying thereafter.

“The future security partnership with the EU will be very important, we currently enjoy a high level of cooperation with member states of the EU in a number of areas on security that are important for our citizens – this is what is at stake.

“I want to see a strong and deep security partnership continuing with our EU partners. We’ll be setting that out in more detail in the White Paper we will publish shortly and I want to show we can accelerate and intensify negotiations – I want to see that from the European Union and the European Commission as well.”