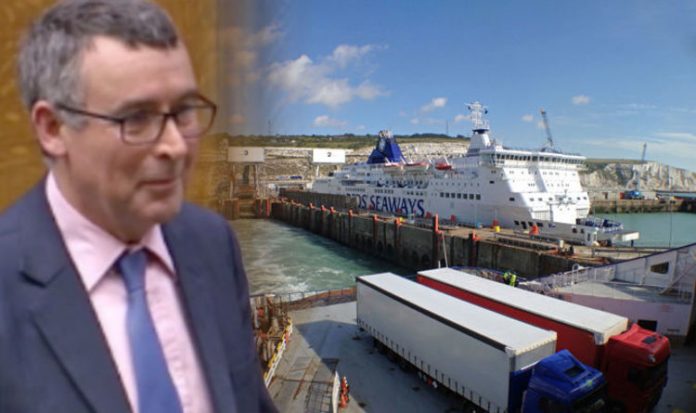 Sir Bernard Jenkin, a senior member of the European Research Group of Eurosceptic Conservative backbenchers, has insisted France will not want to face backlash from its citizens if it imposed new checks at Calais, sparking huge queues at Dover and risking perishable good in the process.

His comments come after arch-Remainers have claimed the French Government would be forced to impose extra security checks on products leaving British ports if the UK left the EU without a deal.

Arch-Remainers have argued these delays could lead to the destruction of perishable goods due to lengthy customs checks in Calais.

However Sir Bernard is insistent this will not happen as he added the French Government does not want to face being blamed by their own citizens.

He said: “If European governments were to cause hold ups, they will be causing the chaos.

“From the perspective of their own businesses and citizens, who would they will blame?

“The French farmers would be rioting. This just will not happen.”

Writing on Telegraph.co.uk, Sir Bernard added: “The ‘no-deal’ disruption scenario is based on a central absurd assumption: that Calais and the other EU ports will be choked and paralysed by new, lengthy and permanent customs checks, regardless of the consequences for businesses and livelihoods, or whether they are necessary or legal.

“It is suggested the French, in particular, will wreak some kind of havoc, as the EU requires a kind of customs compliance, which, incidentally, is seen nowhere else on this earth.

“So we must fear the vast destruction of perishable goods such as fresh food and medicines, and the paralysis of just-in-time supply chains, and supplies to supermarkets.”

His comments come after it emerged ministers have been drawing up plans to re-direct goods if the French Government decides to impose new checks.

Perishable food and ”strategic” products, such as military and communications equipment, will be re-directed to Belgian and Dutch ports to ensure their passage into Europe will be unhindered, according to the new plans.

Goods will be re-routed to Harwich in Essex, just two and a half hours’ drive from Kent, where they will be transported to Rotterdam, the Netherlands.

Another proposed alternative is Felixstowe, slightly north of Harwich, to Vlaardingen, in South Holland.