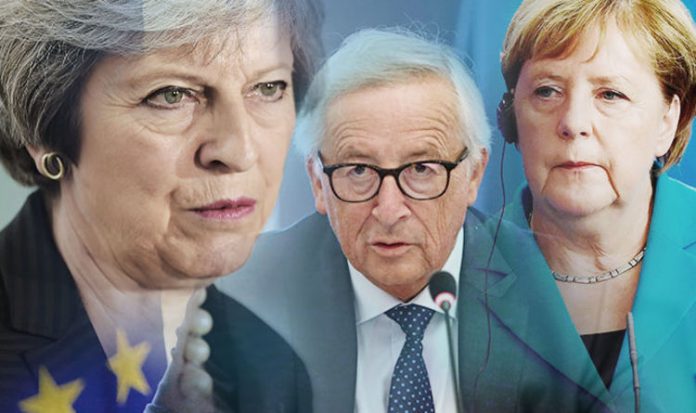 Germany has asked for less detail on the UK’s future economic and trade ties with the EU, according to Bloomberg.

The EU is concerned that any bilateral talks could derail the bloc’s Brexit negotiating strategy and allow Brussels to be sidelined at a time when both sides have admitted that a no-deal Brexit is a real possibility.

The UK’s Brexit Secretary Dominic Raab has said that if there were to be a breakdown of talks, there would be various mini-deals to mitigate the seriousness of a no-deal Brexit.

A diplomat from the European Commission told Politico: “We’ve explained everything that you should know, if you have more questions we’re always ready to provide answers. There’re absolutely no need to go to these seminars.”

Sterling has jumped this afternoon following reports that Britain and Germany are set to drop key Brexit demands.

The pound spiked against the dollar and was up almost 1 percent at 1.29 on the day.

Versus the euro, the British currency gained 0.5 percent to hit 1.11.

Neil Wilson, chief market analyst at Markets.com, said: “The reports indicate that both sides are prepared to forego ironing out some details on the future relationship now, in order to get a deal done.”

Both British and German governments have abandoned key demands over Brexit, report Bloomberg.

Sources say Angela Merkel is ready to accept a “less detailed agreement on the UK’s future economic and trade ties with the EU”.

2:30pm update: UK services sector are struggling to find workers due to Brexit

According to IHS Markit and the Chartered Institute for Purchasing and Supply for the services industry, companies are being held back from carrying out their activity by the labour shortage.

Jeremy Thomson-Cook, the chief economist at WorldFirst, said: “Another day, another survey showing Brexit uncertainty weighing on a part of the UK economy”.

Chris Williamson, the chief business economist at IHS Markit, said the drop in confidence was to the lowest levels seen since the EU referendum.

He said: “This is largely reflecting increased anxiety over Brexit negotiations.”

Mr Barnier is drawing up a rival Brexit plan to the government’s Chequers plan.

The plan is more in line with a Canada-style trade deal.

12:30am update: Theresa May and Jeremy Corbyn clash over Brexit at PMQs

During the heated debate, Mr Corbyn said: “The Chequers proposal is dead, already ripped apart by her own MPs.

“When will the Prime Minister publish a real plan that survives contact with her Cabinet and with reality?

“When will we get proposals that put jobs and the economy ahead of the survival of herself and her own government?”

Labour’s Rupa Huq said: “The British people voted. It is now up to this government – and I believe politicians across the whole House – to show our faith with the British people and deliver on their vote.”

Ports in the north of England are preparing for an increase of freight as shipping companies try to find alternatives to Dover after Brexit as they are concerned of long queues.

Associated British Ports said: “Cargoes originally destined for ports such as Dover are moving increasingly north as trade partners look at alternatives to mitigate any difficulties the more traditional routes may experience in future”.

10:30am update: David Davis to throw weight behind a different Brexit plan

The former Brexit Secretary is ready to get behind an alternative to the government’s Brexit strategy.

Mr Davis is set to endorse the proposals for an advanced free trade agreement after he said that the Chequers plan would be “almost worse than staying in the EU”.

Mr Davis’ plan is scheduled to be published later in September and will make the case for a Canada-style trade deal.

9:30 am update: NHS bills to increase after Brexit, say doctors

Doctors claims that the NHS bill for hiring non-UK staff could hit £500 million after Brexit.

The Royal College of Physicians have said that the costs of recruiting EU and non-EU staff could more than triple from the current £150 million a year if the freedom of movement ends after Brexit.

This money would be needed to pay for visas to enable staff to work in the UK and for the immigration health surcharge.

Manchester Mayor Andy Burnham wants to extend talks between the UK and the European Union to stop the country leaving the bloc without an agreement.

Mr Burnham is also due to warn today the Brexit debate could just become about the prospect of a no-deal outcome and demands for a second EU referendum.

He is expected to say: “The biggest danger facing British politics right now is to allow this polarised no-deal/People’s Vote dynamic to shape the next six months.

7:30am: Mervyn King launches Brexit attack on May

Mervyn King has said that it “beggars belief” that the UK had been left in a situation where it was forced to take action or face catastrophe.

Speaking to the BBC, he said: “Frankly, if a government cannot take action to prevent some of these catastrophic outcomes, whatever position you take on the EU, it illustrates a whole lack of preparation.