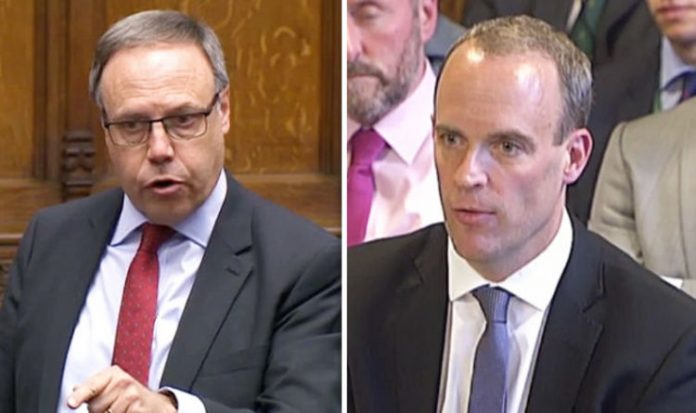 Nigel Dodds said it was “despicable” that EU officials were willing to put the peace process at risk to score political points over Brexit.

And he warned against any kind of backstop which would create regulatory differences between Northern Ireland and the rest of the UK.

Speaking in the House of Commons, Belfast North MP Mr Dodds claimed such a move “would constitutionally break up the UK”.

Brexit Secretary Dominic Raab responded by agreeing that “some are trying to use this as leverage” in talks between the UK and EU.

However, he warned the negotiating tactic “won’t work” and said that Britain will not “draw a customs border down the Irish Sea”.

Mr Dodds told MPs: “I wish sometimes people would actually travel the road from Belfast to Dublin, and Dublin to Belfast, because they actually pass on the border camera infrastructure already.

“The fact is that there are people in this House and in the European Union and in the Irish Republic using the issue of the Irish border and more despicably the Irish peace process and the political process to either thwart Brexit or to mould it in their own way.

“The reality is that this House would never accept any kind of backstop which creates regulatory or other differences between Northern Ireland and the rest of the UK because that would be something that would constitutionally break up the UK.

“Can the Secretary of State reassure the House that he will stick to that going forward.”

Replying to the DUP’s Westminster leader, Mr Raab said: “I fear on the fact that some, not all, but some are trying to politicise the issue.

“I do think there are legitimate issues, we’ve committed to giving effect to the joint report that we agreed with the EU.

“But it’s certainly true that some are trying to use this as a leverage and that won’t work.

“What we’re not going to do is accept the EU’s proposal through the protocol because it will effectively draw a customs border down the Irish Sea.

“That would threaten the constitutional and I think the economic integrity of the UK and we will not give in to that.”

Labour MP and outspoken Brexiteer Kate Hoey said the border issue could be solved “with genuine co-operation and goodwill on all sides”.

Ms Hoey also urged the Government to drop its Chequers blueprint for Brexit and instead pursue a “Canada plus plus” deal with the EU.