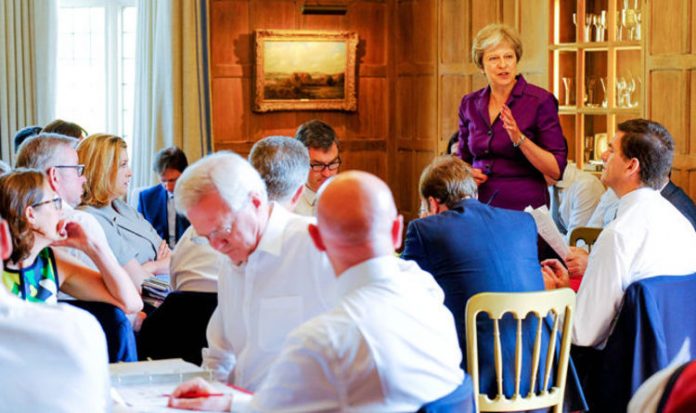 Mr Davis was snapped facing away from the Prime Minister as she addressed her warring Cabinet during an showdown at her country retreat.

Official photographs released by Downing Street show him staring at a folder full of notes while she sets out her Brexit plan tonight.

In other images, top ministers can be seen standing around in informal groups in the lavish surroundings of the mansion.

International Trade Secretary Liam Fox, wearing a full suit and tie, can be seen holding a cup and saucer while talking to Ms Mordaunt.

Elsewhere in the high-ceilinged room, Home Secretary Sajid Javid is engaged in conversation with the UK’s ambassador to the EU, Tim Barrow.

Foreign Secretary Boris Johnson, in shirt sleeves and tieless, stands with his arms folded during a chat with his colleagues.

And Chancellor Philip Hammond and Transport Secretary Chris Grayling can be seen in an animated conversation.

The marathon talks at Chequers are expected to drag through the night, as Mrs May tries to persuade ministers back her Brexit plans.

Mrs May wants her team to unite behind a comprehensive offer to the EU to be set out in a White Paper for publication next week.

She said ministers had “an opportunity and a duty” to reach agreement on a plan which would win the support of the public and MPs.

The proposal was set out by the Tory leader in a document more than 100 pages long and distributed to ministers only on Thursday.

Before entering the meeting, Cabinet members were asked to hand over the mobile phones to avoid any leaks to the media.

The entire Cabinet arrived one by one by car at Chequers on Friday morning in time for discussions to start at 10am.

International Development Secretary Penny Mordaunt was the first to be driven into the 16th century redbrick manor house.

Ahead of the meeting, the Prime Minister said the Chequers summit would “agree the shape of our future relationship with the European Union”.

She added: “In doing so, we have a great opportunity – and a duty – to set an ambitious course to enhance our prosperity and security outside the European Union, and to build a country that genuinely works for everyone.

“We want a deal that allows us to deliver the benefits of Brexit – taking control of our borders, laws and money and by signing ambitious new trade deals with countries like the US, Australia and New Zealand.