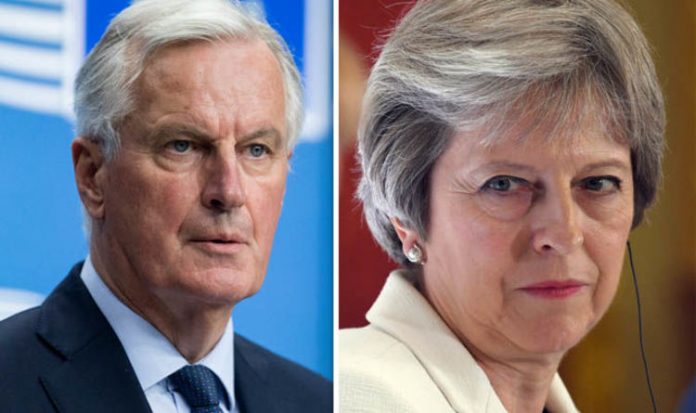 Commenting on an analysis of the negotiations drafted on the social media by Dmitry Grozoubinski, a former WTO negotiator, she said: “Recommended reading – while we as EU negotiators will do our best to reach agreement on an orderly withdrawal incl. a transition, there is no guarantee we will succeed.

“So business needs to prepare for a disorderly #Brexit”.

Mr Grozoubinski had previously tweeted a number of “issues” which “need a fix”, according to his analysis.

Among them were listed the problems UK and EU truck drivers will face following the closure of British borders.

This stark warning follows yesterday’s latest cry for help from Berlin’s businesses, which according to the local Chamber of Commerce will lose millions from a hard Brexit and are looking for solutions.

Speaking about the EU-UK talks, Jan Eder, the director of the Berlin’s Chamber of Commerce and Industry (IHK) said it is “highly regrettable” they are stalling.

He added: “There aren’t even 250 days left in the countdown to the end of March 2019 and we are still facing a completely open negotiation result.

“That leaves many questions open for companies that are economically linked to the UK.”

German-born Ms Weyand, who is civil servant Olly Robbins’s counterpart, had previously blasted Brexit as a “process of dismantling something”.

She said: “My job looks like this: Britain is leaving the EU — and we need to organise this in a way that causes as little damage as possible.

“People who work for the EU usually want to build something.

“We’re in the process of dismantling something here.

“That may be frustrating at times, but everyone knows it needs to be managed professionally.”

08.45am update: Jacob Rees-Mogg to prepare a new Brexit deal

Arch-Brexiteer Jacob Rees-Mogg is leading a faction of dissident to create an “alternative view: to the much-criticised government’s white paper.

The rebels believe the document will be ready as soon as next month, and will feature the advantages to the UK of leaving the EU on World Trade Organisation (WTO) terms.