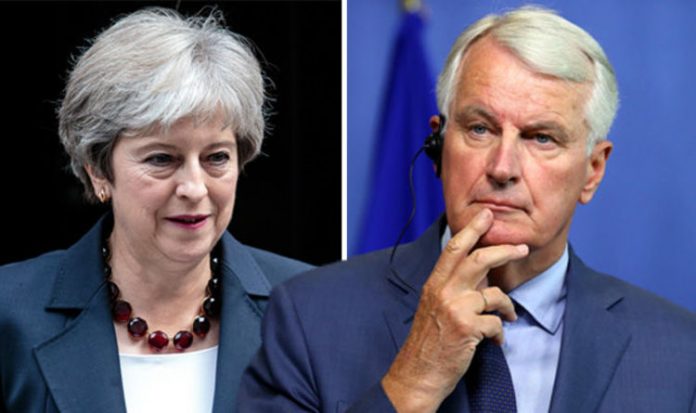 Michel Barnier held talks with the Brexit select committee on Monday to discuss progress in the negotiations, and made it “crystal clear” that the Chequers plan was unacceptable, according to Labour’s Stephen Kinnock.

During exchanges with Brexit Secretary Dominic Raab, the anti-Brexit campaigner insisted Brussels had spiked the plans.

He said: “I can tell you absolutely, unequivocally, without a shadow of a doubt that Chequers is dead in the water.

“Mr Barnier made it crystal clear that Chequer’s is completely unacceptable to the European Union.”

Mr Raab asked: “Can I just check he said ‘dead in the water’?”

Former Brexit minister David Jones quizzed Mr Raab on why he was “flogging this dead horse?”.

The Tory MP asked: “You admitted that your focus is on trying to deliver an agreement along the lines of Chequers.

“We know from Mr Kinnock that Mr Barnier thinks that Chequers is ‘mort dans l’eau’.

“Why are you flogging this dead horse?”

Mr Raab replied: “This is a negotiation with the EU so you are going to hear noises from various sides that are critical.

“That is an inherent part of a sensitive, contentious negotiation like this, but you should be in no doubt that we are making good progress.”

During the session of the Commons European Scrutiny Committee, Mrs May’s Europe adviser rejected suggestions that he should tell the Prime Minister to put the Chequers plan “out of its misery”.

Olly Robbins said the proposals were a “credible, sensible” offer.

Sterling jumped on Wednesday afternoon following reports that Britain and Germany are preparing to drop key Brexit demands, paving the way to a deal in the coming months.

Berlin is ready to accept a less detailed agreement on Britain’s future trade ties with the EU in an effort to get a Brexit deal done, according to Bloomberg.

Downing Street insisted there was no change in the UK’s position on the need for “proper” information about the future relationship to be available by the time Parliament votes on the withdrawal agreement.

Mrs May, meanwhile, directly challenged Jeremy Corbyn to rule out a second referendum on Britain’s withdrawal from the EU, but the Labour leader sidestepped the calls.

The pair clashed at Prime Minister’s Questions in the House of Commons shortly after the UK’s Brexit preparations were branded “incompetent” by former Bank of England governor Mervyn King.

In a damning assessment, Lord King told the BBC the Government had been left without a credible bargaining position.

He said it “beggars belief” that Britain, one of the world’s leading economies, had found itself in a situation where the country was being told to take a course of action or face catastrophe.

He suggested blame should be shared by the Government, Parliament as a whole and those in Whitehall who were tasked with making key decisions.

Labour has so far declined to take off the table the option of a vote on the final Brexit deal, and Mr Corbyn is coming under intense pressure from People’s Vote campaigners to commit to a second referendum.

The party’s Greater Manchester mayor Andy Burnham said in a high-profile speech in London that he was ready to support a second poll as a last resort to prevent the UK crashing out of the EU without an agreement.

But he said the Government’s first option should be to ask the EU to postpone the March 2019 deadline for the UK’s departure to allow further negotiations.