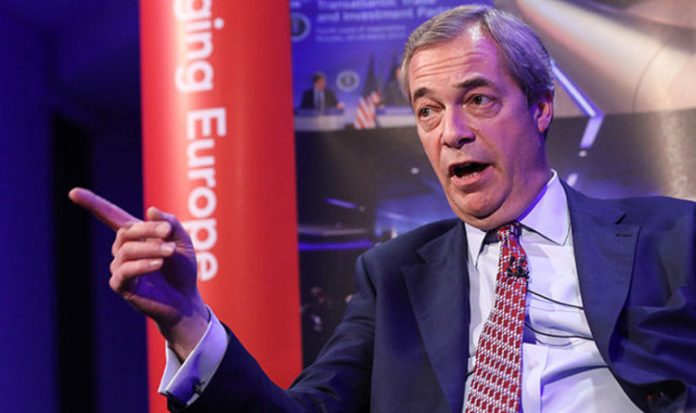 The former Ukip leader will tour the UK with the Leave Means Leave group to challenge the Prime Minister’s Chequers “betrayal”.

A defiant Mr Farage will join the campaign’s battle bus at events across the country to help raise funds and rally Leave supporters furious with the government’s Brexit blueprint.

Writing in the Daily Telegraph, Mr Farage, 54, said: “I’ve had enough of their lies, deceit and treachery.

“The time has come to teach them a lesson – one that they will never forget.

“Theresa the appeaser has produced ideas that are a cowardly sell-out. Now is the time for action.

“Since the Chequers betrayal, scores of people have stopped me to ask: ‘When are you coming back?’”

In his latest comeback, Mr Farage will team up with the Eurosceptic Leave Means Leave campaign, which is run by businessmen Richard Tice and John Longworth.

Mr Farage is adamant Mrs May’s Chequers plan would prevent the UK from taking control of its borders and fishing rights or signing free-trade deals with other countries.

The LBC radio host believes Britain is lacking “leadership” and hopes the campaign “re-engages voters and restores their faith in Brexit”.

Mr Farage added: “Most of all, our complacent MPs need to understand just how strongly people fell about being lied to while their wishes are blatantly ignored.

“In order to demonstrate the level of disenchantment that exists, we need an organised campaign that is not motivated by party politicians out to gain some personal advantage.”

He is adamant “millions” of Brits will back the initiative.

Mr Farage’s return comes amid calls for a second referendum to decide the final Brexit deal.

Campaign group People’s Vote believes the electorate should have the final say on any deal struck with the single bloc.