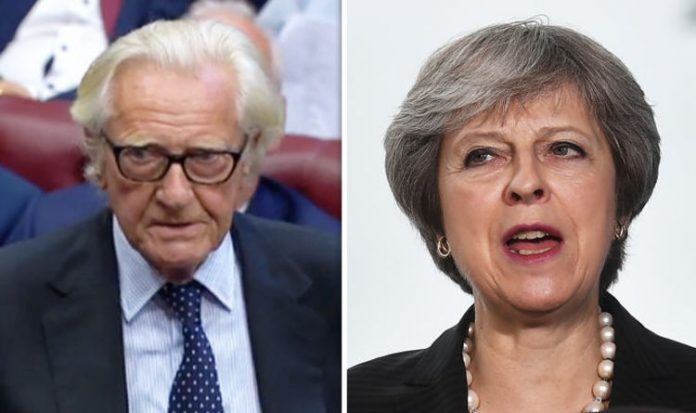 The Tory peer and arch-Remainer said Mrs May’s Cabinet agreement over Brexit had already been “disowned” by Eurosceptic Tories.

In a furious rant in the House of Lords, he accused the Prime Minister of having “no plan” to lead Britain out of the EU.

And he said holding a second referendum on the UK’s impeding exit was the only way to solve the issue.

Lord Heseltine told peers: “We have now seen what Brexit really amounts to, in the minds of Brexiteers.

“There is no plan, there is no detail. There are phrases but there is no reality behind the rhetoric and the emotion.

“The question that has to be asked is: what is Brexit? We know ‘Brexit is Brexit’, that’s a very clear statement, but what actually is Brexit?

“I glanced at the Chequers document and I said: ‘This is dead, it won’t work.’

“It has been disowned by the Europeans and the right-wing of the Conservative Party, and parts of the Labour Party as well.”

The former deputy Prime Minister dismissed claims that Brexit was the ‘will of the people’, saying voters should head to the polls again.

He said: “Growing in volume and in articulation is the demand to let the people have another chance.

“The right solution is to ask the second question about Brexit and see if there is a way to re-visit the fundamentals.

“Brexit is a disaster. There is no compromise with the Brexiteers. There never has been, there never will be. For my money here we stand and fight.”

His comments came as Theresa May said the responses to her Chequers plan for Brexit had been “constructive” so far.

Speaking on a visit to Newcastle, the Prime Minister insisted she could sell the blueprint to other European leaders.

She said: “What I see is people focusing their minds now on the impact the future relationship will have on their economies as well as ours.