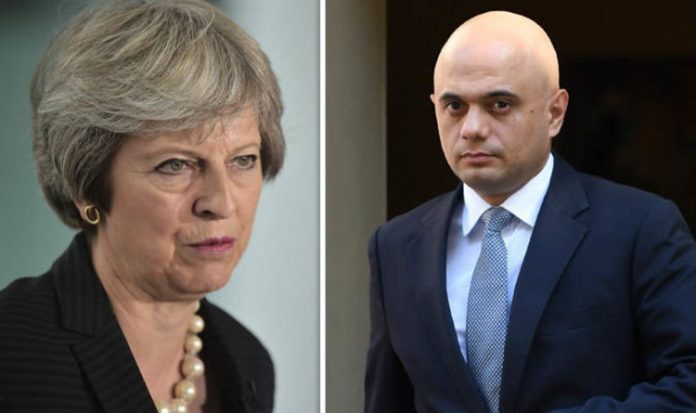 A No10 spokesman told Express.co.uk Mrs May was “aware of the position” of the Home Secretary, who contacted US Attorney General Jeff Sessions on June 22 to allow Washington to trial  Alexanda Kotey and El Shafee Elsheikh.

But it is unclear whether she supported Mr Javid’s decision.

The pair, who it was revealed today have been stripped of their British citizenship, were captured in January and accused of being members of a cell of IS executioners in Syria and Iraq nicknamed ‘the Beatles’.

The spokesman added the words of Security Minister Ben Wallace told earlier today in the Commons represent the position of the whole government.

Mr Wallace said: “In this instance, and after carefully considered advice, the government took the rare decision not to require assurances in this case.”

With Mr Javid’s letter, Britain effectively loosened its stark opposition to the death penalty and the detention without trial in notorious Guantanamo Bay to allow the alleged terrorists to be sent to America.

Mr Javid wrote Mr Sessions: “I am of the view that there are strong reasons for not requiring a death penalty assurance in this specific case, so no such assurances will be sought.

“As you are aware, it is the long-held position of the UK to seek death penalty assurances, and our decision in this case does not reflect a change in our policy on assistance in US death penalty cases generally, nor the UK Government’s stance on the global abolition of the death penalty.

“Ensuring foreign fighters face justice raises a real challenge for all our jurisdictions.

“However, in this instance, we believe that a successful federal prosecution in the US is more likely to be possible because of differences in your statute book and the restrictions on challenges to the route by which defendants appear in US courts.

“The US currently has additional charges for terrorism offences which are not available under UK criminal law, and those offences carry long sentences.”

Mr Javid’s decision to abandon the opposition to death penalty in any case was branded “abhorrent and shameful”.

Labour MP Diane Abbott said: “This decision to abandon our principled opposition to the death penalty is both abhorrent and shameful, and I call on ministers even at this late stage to reverse this decision.”

And the Lavour Chair of the Commons Home Affairs Committee, Yvette Cooper, tweeted: “UK govt; ‘it is the long standing policy of the UK to oppose the death penalty in ALL circumstances AS A MATTER OF PRINCIPLE.’

“How can it be a principle if Home Sec has just ripped it up in practice?