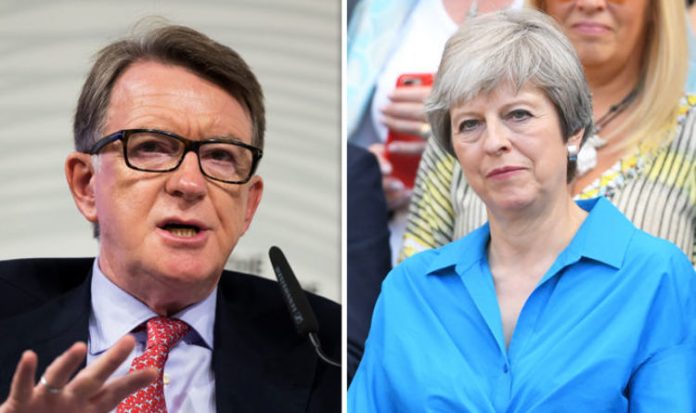 The Labour peer and arch-Remainer fumed at the Prime Minister’s proposals, saying they would deliver “the polar opposite of taking back control”.

Under the plans, agreed by the Cabinet earlier this month, the UK will keep close ties with Brussels on trade and remain subject to EU rules.

Lord Mandelson said this would leave the UK “half-in, half-out” of the EU and hamper Britain’s ability to strike global trade deals.

The former European Commissioner also called for a second referendum on Brexit to let the UK “determine its future”.

He said: “This plan neither allows us to receive the economic benefits of being fully inside the EU’s trade perimeter nor will it give us the freedom to market ourselves independently to the rest of the world.

“It is a halfway house that will leave us hanging by a thread, subject to the EU’s rules – whatever they are in future – with no say in their formulation.

“Britain would be entrapped and the more you think through the implications the more the whole thing looks less like a soft Brexit than a national humiliation.

“Not only would it fail to secure all the trade we have presently but it would severely compromise our ability to negotiate future trade agreements with other countries.

“You are drawn to the conclusion that it would be better to be fully in the economic structures of the EU or out of them altogether, and if you are in them, better to stay in the EU itself as this provides a seat at the table where the rules are made.”

He added: “I fully accept the Prime Minister is putting forward the Government White Paper as a well-intentioned attempt to do Brexit while minimising the economic disruption to Britain.

“But this solution – half in/half out – won’t work, won’t end the argument and will simply mean a confused outcome in which we continue to abide by Europe’s rules while losing our say over them.

“Parliament should reject this solution decisively.”

Lord Mandelson and Mr Blair made the interventions as Brexiteer Tory MPs attempt to force Theresa May to abandon the Chequers plan.

MPs will today vote on a series of Commons amendments hoping to wreck her plan for a “common rule book” covering a new “UK-EU free trade area”.

Meanwhile, pro-EU MPs are tabling their own amendments to the Customs Bill and the Trade Bill, in a bid to keep Britain in a customs union with the EU.