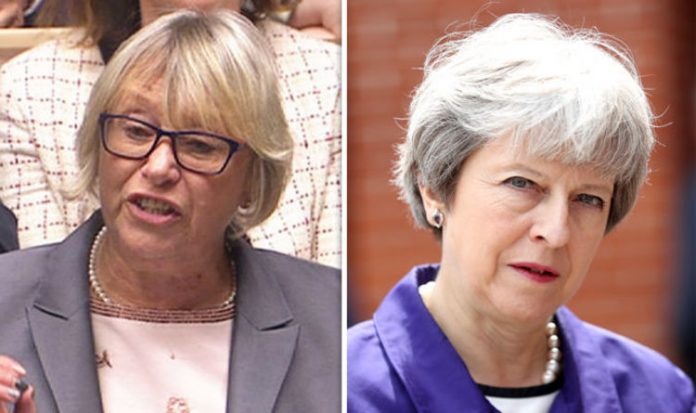 Sheryll Murray, the Tory MP for South East Cornwall, said such a move would be a “betrayal” of the 2016 EU referendum result.

She issued the stark warning as she backed the #StandUp4Brexit campaign rallying against the Prime Minister’s Chequers agreement.

Brexiteers fear that under Theresa May’s controversial deal, the Luxembourg-based court could have direct jurisdiction over the UK.

The ECJ will reportedly be given the final say on legal disputes over the £39bn divorce bill and EU citizens’ rights in Britain.

Mrs Murray told Express.co.uk: “I am not happy about the Chequers deal – I don’t think it delivers on the referendum.

“I think there are still elements of control that the European Union would have.

“At the end of the day, we voted for sovereignty to be restored to Westminster, and that’s what we should deliver.

“If the ECJ has any involvement whatsoever in this country after we have served our notice under Article 50, that would be a betrayal of the referendum result.

“A very large number of my constituents have written to me saying they reject the Chequers deal.”

In her early speeches on Brexit, Mrs May repeatedly pledged to end the ECJ’s control’s over the UK after Brexit.

In her Lancaster House speech last January, she said: “We will take back control of our laws and bring an end to the jurisdiction of the ECJ in Britain.

“Leaving the European Union will mean that our laws will be made in Westminster, Edinburgh, Cardiff and Belfast.

“And those laws will be interpreted by judges not in Luxembourg but in courts across the country.

“Because we will not have truly left the European Union if we are not in control of our own laws.”

But she is reported to have privately accepted the ECJ will have control over some areas of the UK’s future relationship with the EU.