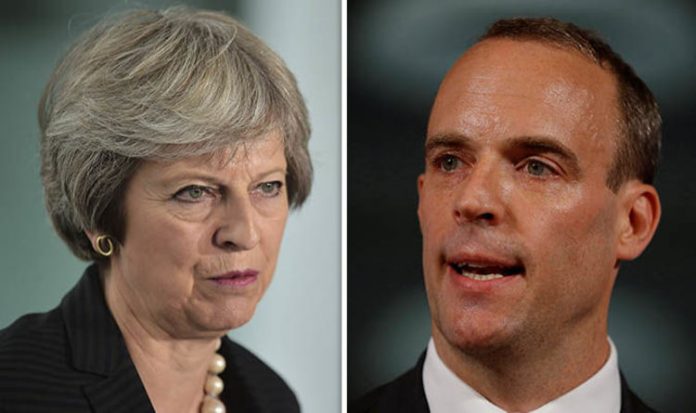 Theresa May revealed in July that Downing Street was assuming responsibility for leading the Brexit negotiations, down-classing the role of the Department for Exiting the European Union (DExEU).

Questions were consequently raised surrounding the ongoing role of DExEU, and the potential sidelining of the newly appointed Brexit Secretary Dominic Raab.

Speaking exclusively to Express.co.uk, UKIP MEP Tim Aker warned Mr Raab likely has “nothing” to do with the Brexit negotiations and accused him of being complicit in Mrs May’s “dismantlement” of the UK’s departure from the EU.

He said: “If Downing Street is to be believed, then Dominic Raab has nothing to do with the Brexit negotiations and is purely in place to start preparations for a ‘no deal’.”

The European lawmaker noted that despite previously being billed as a true Brexiteer, Mr Raab had failed to deliver on the will of the Brexit voter.

He said: “If Dominic Raab was actually a true Brexiteer, he would not be assisting Theresa May with the dismantlement of Brexit.

“He would be much better off making a stand like David Davis and refusing to cooperate with May.”

Mrs May’s decision to re-appropriate control of the Brexit negotiations in Downing Street handed greater control to her main Brexit adviser, Olly Robbins, who heads the Europe Unit in the Cabinet Office.

“Both of us will be supported by the Cabinet Office Europe Unit and with this in mind the Europe Unit will have overall responsibility for the preparation and conduct of the negotiations, drawing upon support from DExEY and other departments as required.”

She said: “Dominic Raab has been sidelined by the Prime Minister before he has even had the chance to get his feet under the table.”

The move also angered Brexiteers, who regard Mrs May and Mr Robbins as the architects of the Government’s current ‘soft’ Brexit policy, as outlined in the Chequers White Paper.

Mr Aker equally expressed his fury at the current state of Brexit negotiations, and warned that Mrs May had “lost control” of the process.

He said: “The Conservative Party’s handling of Brexit has been a complete shambles since the vote on the 23rd of June 2016.

“It wouldn’t surprise me if Theresa May still has no idea what is going on; She’s lost control of the whole thing and it’s time for her to go.

“We will never see the Brexit 17.4million people voted for with a Remainer as Prime Minister.”

Mr Raab nevertheless sought to appease fears of Britons on Thursday, stating the Government was “still confident” of achieving a viable Brexit deal with the EU, in a speech in Westminster.

The announcement coincided with the publication of the first 24 technical notices, detailing the measures the Government intends to implement in the event of a ’no deal’ Brexit in order to avoid disruption for Britons.

The Brexit Secretary said: “So, while we are striving for the best outcome and a good deal from these negotiations, we stand ready to deliver Brexit for the British people if there is no deal.”

He also stated a ‘no deal’ Brexit would give the UK “unfettered ability to lower tariffs, to bring into effect new free trade deals that we can negotiate straight away”.