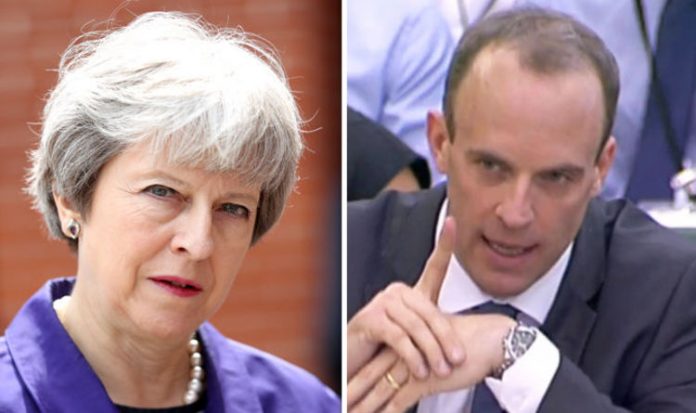 In a stark warning, Mr Volkery urged businesses to prepare “emergency plans” if the UK leaves the EU with a trade deal.

And he claimed Brexit could even be delayed beyond next March to give negotiators more time to strike a deal.

Mr Volkert said: “There has apparently not been a breakthrough with the recent British proposal for a free trade zone for goods.

“For the Europeans, the offer is not enough, however.

“The negotiations now resemble a game of ‘chicken’ – no side wants to give in.

“Instead, both are stepping on the gas in the final metres to force their counterparts to avoid them.

“However, the longer the two cars approach each other, the greater the danger of an accident.”

The journalist also claimed Britain was “unprepared” for the impact of Brexit, as the historic exit day edges closer.

The UK is currently due to leave the bloc next March, although Mrs May has agreed to a two-year ‘transition period’ for trade.

But Mr Volkert said the negotiations could be extended, in a move which would infuriate Brexiteers.

The journalist said: “By extending the Article 50 negotiating period, the deadline could be delayed.

“That could buy the negotiators the crucial days at the end.

“But companies can not rely on that. They must urgently activate their emergency plans if they have not already done so.

“A Brexit disaster by accident can no longer be ruled out.”