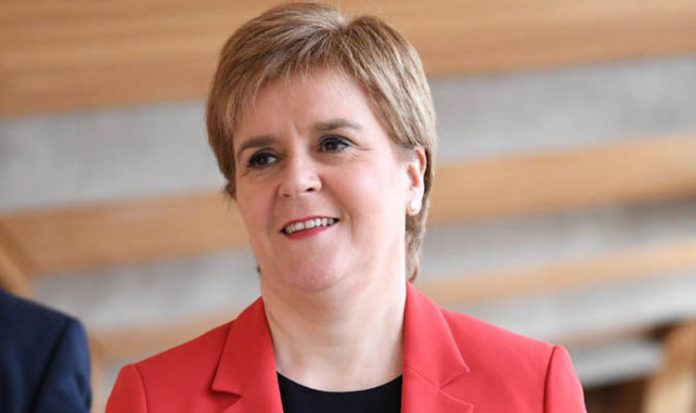 The Scottish Nationalist First Minister wrote to other UK opposition leaders claiming an extension of the formal Article 50 negotiation process must remain “on the table” as she tried to garner support from Remainers.

Critics have warned that suspending Article 50 and delaying the Leave date from 29 March 2019 will mean Britain never escapers the clutches of the EU.

It is understood that many EU states who want to keep British financial contributions to Brussels are ready to accept the idea.

But the Scottish Conservatives said that Ms Sturgeon was “posturing” in the hope that voters in Scotland will not notice her appalling record on health, policing and education.

The Scottish Tories warned her remarks were made solely “with independence in mind”.

Adam Tomkins, the Scottish Conservative’s constitution spokesman, said: “It was Nicola Sturgeon who linked Brexit to independence even as the votes in June 2016 were still being counted.

“She knows that Scotland wants neither independence nor a second independence referendum, so now she is seeking to delay Brexit in the vain hope that she can use to it to pursue the only goal she cares about.

“The majority of Scots are sick and tired of her posturing, and can see straight through it.”

Urging other parties to back a delay, Ms Sturgeon said the “political establishment” needs “an urgent reality check”.

The woman whose political career is solely focussed on splitting Scotland from Britain, ironically claimed the Brexit divorce process was heading toward a choice between two “completely unacceptable” scenarios – a no-deal or so-called “blind” Brexit.