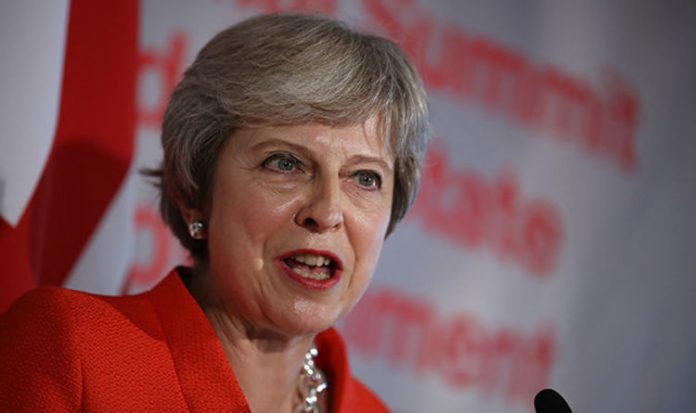 However Aarti Shankar said European leaders were still struggling to get to grips with the political realities of the Irish border situation, suggesting compromises were impossible for domestic reasons – meaning a no-deal situation was becoming increasingly likely.

Senior Policy Analyst Ms Shankar told Express.co.uk: “What happened in the half-hour before she got up to speak, when we had Mr Tusk and French President Emmanuel Macron saying aspects of her Chequers deal were unworkable, left her somewhat winded.

“This was clearly not the outcome she was hoping for.”

Mrs May was hoping Salzburg would offer her some breathing space and the chance to sell her ideas to European leaders.

Instead, Ms Shankar said, “she has red lines all around her”.

Michel Barnier’s backstop plan aims to prevent the need for a hard border between Northern Ireland and the Irish Republic, which would involve Northern Ireland remaining subject to EU regulations when it comes to goods and agriculture.

However, Ms Shankar said: “I’m trying to understand what the EU’s strategy is here.

“If they are trying to force her to accept the backstop idea I’m not sure they have calculated correctly.”

Mrs May’s coalition partners the DUP have already made it clear they would not tolerate such a plan because it would mean Northern Ireland being treated differently to the rest of the UK, characterising it as a “border in the Irish sea”.

Ms Shankar explained: “I don’t think politically she can accept their plan – it simply is not acceptable to the UK.

“If there is no compromise then a no-deal Brexit becomes increasingly likely.

“I can see the EU agreeing to suspend Article 50 if it looks like an agreement is close.

“But if they are still at loggerheads with a few days to go then an agreement may be unlikely.”

During the course of her speech, Mrs May insisted the Government was still working towards the nominal October deadline for striking a withdrawal agreement.

But Ms Shankar suggested the process could easily go beyond the New Year as negotiators work feverishly to hammer out a deal.

Referring to Maltese Prime Minister Joseph Muscat’s claim that most European leaders were still hoping for a second referendum, she dismissed the idea as highly unlikely.

She added: “Apart from anything else, what question do you ask the public at this stage?

“And if there’s no time to hold one before March 29 anyway, then it becomes a referendum on rejoining the EU, which is a completely different thing.”

During the course of her speech Mrs May admitted: “Concerns have been raised over Chequers. I want to know what they are.

“Hard work needs to be done.”

But she added: “Let nobody be in any doubt, and I’ve aways said this, we are preparing for no deal.”