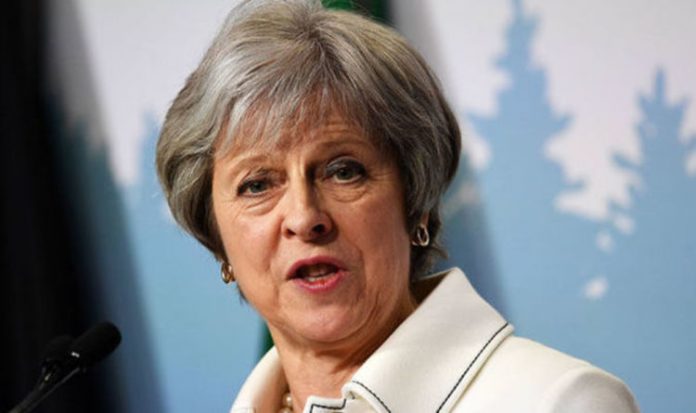 Arriving in Cape Town this morning to announce plans boost Britain’s investment in Africa after Brexit, Mrs May was all smiles after dismissing the Chancellor’s Project fear offensive as an old “work in progress”.

Mrs May is undertaking a tour of the continent as part of a three-day trade mission which will also see her visit Nigeria and Kenya and meet with leaders of the countries in order to deepen ties with African economies ahead of Britain’s departure from the EU in March next year.

Her trip comes days after playing down warnings that a no-deal Brexit would cost Britain millions and 10 percent of GDP compared to staying in the EU over 15 years.

Responding to Mr Hammond’s claims, Mrs May said: “As I understand it the Chancellor was talking about a set of figures that when they came out in January I commented that they were work in progress at that particular time.

“Look at what the director of the World Trade Organisation [Roberto Acevedo , last week, on Today programme] has said, about a no deal situation, that it would not be a walk in the park but it wouldn’t be the end of the world.

Mrs May spoke to journalists on board the Government’s official Voyager aeroplane as she flew overnight out of the UK.

She will announce an “ambitious new approach” to the UK’s aid spending in Africa, by using it to help British private sector companies invest on the continent.

her visit to Nairobi will mark the first by a UK prime minister to Kenya since Margaret Thatcher in 1988.

See below for Brexit Live updates:

Mrs May was showered with applause by teachers and pupils alike as she entered I D Mkize School assembly.

She danced with school children after receiving a guard of honour from a marching band and pupils waving South African and British flags.

She then sang the British national anthem.

8am update: May on why Britain must prepare for No Deal

The PM was further questioned by journalists on the current negotiations with Brussels.

She said: “What is important is that the Government sits down and negotiates with Europe in relation to the deal that we believe will be good for both sides but at the same time recognising that as we don’t yet know what the outcome of these negotiations will be, that it’s right we make these preparations for a no deal.”