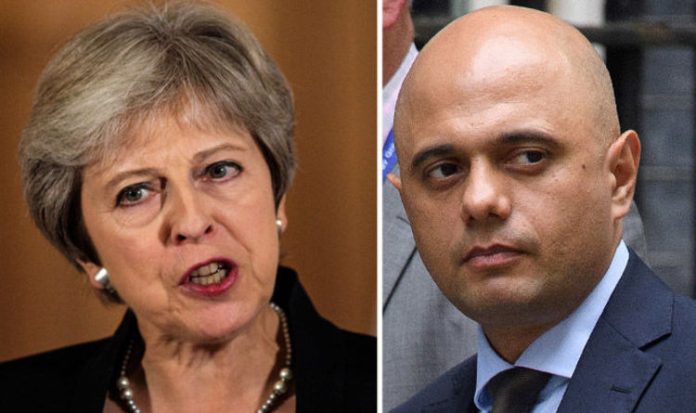 Chancellor Philip Hammond is fighting to keep the rules as similar as possible to the current ones to help businesses recruiting from abroad.

Mrs May’s plan to crackdown on low-skilled migrants after Brexit is also expected to clash with her Government ministers.

According to The Sun, Mr Javid told the cabinet that EU nationals will be able to go to and from the country freely until September 2021.

This comes as the Labour Party is due to vote on the motion of backing a second Brexit vote if there is no general election at the party conference in Liverpool this week as the Government continues to be no closer to forming a deal on Brexit with the EU.

If the motion is passed, the Labour Party must back a “public vote” on Brexit if Jeremy Corbyn is unable to secure a general election.

The final draft for the vote says: “If we cannot get a general election, Labour must support all options remaining on the table, including campaigning for a public vote.”

The vote will be conducted tomorrow, Tuesday September 25, and was the result of a five-hour meeting with shadow Brexit secretary Keir Starmer and 100 delegates from trade unions and local parties.

The motion also states that if Theresa May’s fragile Brexit plans collapse, the Labour Party must support all options remaining on the table, including a public vote.

Mr Corbyn said he would be “bound” by the result of Tuesday’s vote.

The proposed vote comes as Mrs May’s Chequers plan was rejected by EU member state leaders at the Salzburg Summit last week, which has raised speculation of an increased chance of failure of a deal.

Mrs May is due to chair a cabinet meeting today, Monday September 24, amid growing pressure for her to change her Chequers proposal for Brexit.

SCROLL DOWN FOR LIVE BREXIT UPDATES

9am update: Shadow Chancellor says he was likely to vote against any Brexit secured by Theresa May

Mr McDonnell told LBC: “On the deal that is likely to come out of Brussels under Theresa May at the moment, I can’t see what she has proposed so far would protect jobs and the economy and I would vote against it and I’ll vote against it in Parliament as well.

“But we’ll see what she comes back with. Things might change, I can’t see it though at the moment.

“It doesn’t look good in terms of the proposals that she put forward, I just don’t think they are workable.”

Mr McDonell has suggested that the second referendum that the Labour Party want would not include an option to remain in the EU.

8:30am update: The majority of the Cabinet supports a Canada-style trade deal with the EU after Theresa May’s Chequers plan was rejected by EU state heads

Government ministers are expected to tell Mrs May that a free trade agreement is the only form of Brexit deal that could have a majority in Parliament.

One Cabinet source told the Telegraph: “In a nutshell, we now face a choice between a Norway-type deal and a Canada-type deal.

“More than half the Cabinet now support the idea of a Canada-style option, while there are maybe half a dozen who favour Norway.”