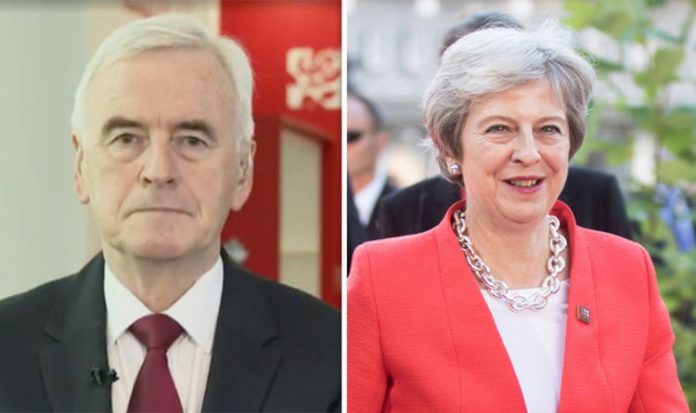 The Shadow Chancellor last night urged Mrs May to quit, as divorce negotiations between the EU and UK continue to falter.

Mr McDonnell said the talks had descended into a “mess” with just six months until Britain is set to leave the EU.

And he claimed any deal the Prime Minister manages to strike with Brussels would be by rejected Tory MPs.

The left-winger said: “Theresa May has proved herself incapable of negotiating her way out of a paper bag.

“I have no sympathy for her. She’s got us into this mess, she’s got a responsibility to the country to go.

“She’ll get some form of deal with the EU, probably a fudge. It won’t be one that even her own party will support.

“So what we’re saying to Theresa May is accept that you’re not going to get a deal that will protect jobs and the economy, move to one side and let us do the negotiations.

“If not, move over, let’s have a general election.”

Mr McDonnell made the comments ahead of a speech at the party’s annual conference in Liverpool.

Labour is launching a radical plan to require private companies to hand over a 10 per cent share of their equity to workers.

Speaking at the party’s conference in Liverpool today, John McDonnell will say that it could net almost 11 million workers up to £500 a year each.

READ  Church of England bishop: If vaccine is good for Queen its good for all | Royal | News (Reports)

But additional income would be capped at that level, with any further dividends going to a national fund to pay for public services and welfare.

But the Conservatives branded the proposal “yet another tax rise” which could deter companies from hiring staff.

Chief Secretary to the Treasury Liz Truss said: “It would make it harder for local businesses to take on staff and pay them a good wage.”