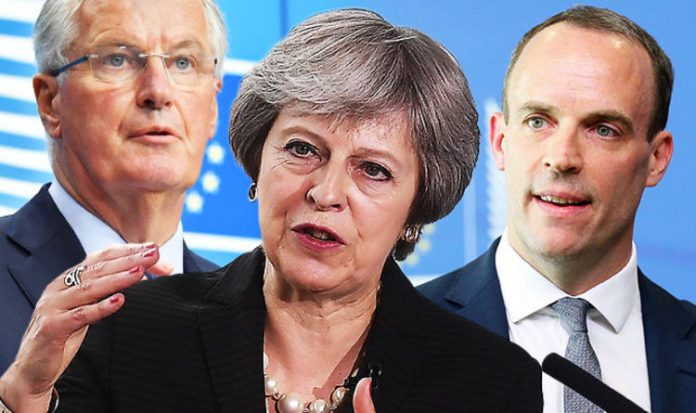 It comes as Brexit Secretary Dominic Raab accused the EU of “irresponsibly” ramping up pressure in withdrawal negotiations and is still trying to persuade members of the Cabinet that the Prime Minister’s Chequers compromise agreement was “the best plan to get the best deal”.

Mrs May will then visit a local business Armstrong Works  at 1pm for an on-camera question and answer session with staff and will be the first time she has faced intense scrutiny from the public since an ill-fated Question Time appearance before last summer’s General Election.

Her Chequers deal has suffered another major blow with reports that chief Brexit negotiator Michel Barnier has swiftly rejected the plan to provide the City with limited access to the single market.

EU officials have also reportedly suggested they would only consider granting an Article 50 extension if there was a “genuine chance” of a big shift in position from Britain – specifically a new Prime Minister or General Election.

Foreign Secretary Jeremy Hunt has said Europe must “show much more flexibility and creativity” to avoid a “no deal by accident” situation post-Brexit.

He is meeting German counterpart Heiko Mass in Berlin today, with Britain’s exit from the European Union taking centre stage.

After weeks of crisis over her plans, the Prime Minister will be hoping for temporary breathing space as the Commons rises for its summer recess on Tuesday.

Ryanair has expressed concern about the danger of a gard Brexit, adding the risk of one was being “underestimated”.

The airline issued the warning after reporting a 20 percent fall in profits to £285 million for the April to June period, citing lower fares, higher oil prices and pilot costs.

Its profit forecast for this year remains unchanged at £1.12 billion to £1.21 billion, but said this was “heavily dependent” on fares in the current quarter and “no negative Brexit developments”.

The Irish carrier said: “While there is a view that a 21-month transition agreement from March 2019 to December 2020 will be implemented (and extended), recent events in the UK political sphere have added to this uncertainty, and we believe that the risk of a hard Brexit is being underestimated.

“It is likely that in the event of a hard Brexit our UK shareholders will be treated as non-EU.

“We may be forced to restrict the voting rights of all non-EU shareholders in the event of a hard Brexit, to ensure that Ryanair remains majority owned and controlled by EU shareholders.”

Talks on a Brexit deal between the UK and EU are continuing, with customs arrangements the latest hurdle.

Mr Hunt said: “I will be clear that our European partners must show much more flexibility and creativity in negotiations if we are to avoid a ‘no deal by accident’ scenario.”

7.02am update: Raab leaves ‘no deal’ on the table – UK could be OUT by October

Brexit Secretary Dominic Raab has warned Michel Barnier that Britain could thrive whaever the outcome of Brexit talks, adding the EU negotiator was under “tremendous pressures”.

Mr Raab said Mr Barnier wanted to do a deal with the UK but that the Brexit Secretary was prepared for a no deal scenario.

He warned a no deal Brexit is possible if talks fail by October.

Mr Rabb told BBC’s Andrew Marr: “I am striving with my department, with Michel Barnier who I think is a man who wants to do a deal with us, there are tremendous pressures on his side, to get the best deal.

“But I think we have got to, I think it is the only responsible thing to do, to be prepared if those negotiations and the energy, the ambition, and the pragmatism are not reciprocated.

“So that is the responsible thing to do, whether it is the allocation of money, the preparation of our terry relations, we are hiring extra border staff.

“I think people need to know that we are ready, so that Britain can thrive whatever happens.”

6.55am update: Major blasts Brexiteers over no deal “betrayal”

John Major claimed “irreconcilable” Brexiteers will betray Britons if they continued to push Theresa May towards a Brexit no deal.

Speaking on The Andrew Marr show, the former Prime Minister claimed crashing out of the EU without an agreement would have catastrophic consequences for Britain.

He said: “If we crash out without a deal, the people who have least are going to be hurt the most.

“It would be a terrible betrayal of the interest of everyday people who really are not political.”