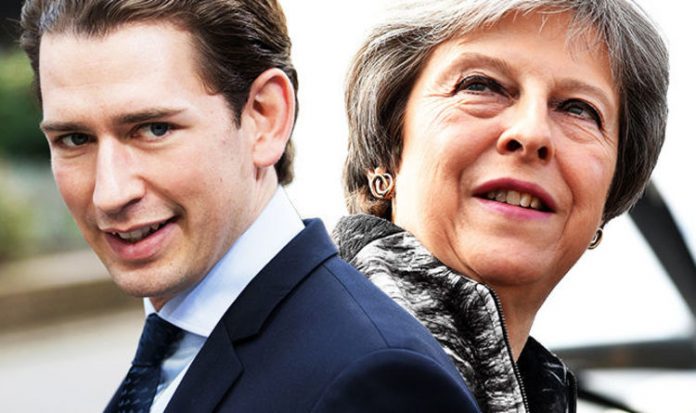 The Prime Minister will hold a round of talks with Mr Kurz and Mr Babis after attending a music festival in Salzburg as a guest of the Austrian Chancellor, before heading to Italy for her summer holidays.

It is part of several meetings across Europe which Mrs May and her ministers are holding as they desperately try to win over support for the new Chequers Brexit blueprint.

But the Czech Government indicated little support for her proposals for the UK’s future relationship with the EU.

Czech Secretary of State for EU Affairs Ales Chmelar told BBC Radio 4’s Today programme: “In terms of the of the customs union and the possible control that would be made on the British border, there is a clear problem with the fact that the EU will not have a mechanism to control its borders and it would be delegated – without any EU control – to a third country, which would be Britain after March.

“So, that is the key principle. But also there is a larger general principle – it is almost physically impossible to have, at the same time, full regulatory autonomy on one side and full market access.

“There needs to be a certain balance between the rights and obligations in those terms.”

Mr Barnier clashed with Brext Secretary Dominic Raab in a joint press conference, warning Brussels will fight to retain its power in the bloc, just as much as the UK is hoping to regain control of its “money, law and borders”.

See below for live Brexit updates from Express.co.uk:

The majority of voters who want a second Brexit referendum has overtaken those who do not for the first time in what marks a significant turnaround, a new YouGov poll has found.

The survey for The Times of 1,653 people in the UK found that 42 percent thought there should be a second referendum on the final terms of any Brexit deal, while 40 percent said there should not. The remaining 18 percent were unsure.

Last month, before Theresa May’s Chequers plan was outlined, 37 percent supported a new vote, but that number rose to 40 percent in the poll last week.

The Prime Minister’s handling of Brexit negotiations have come in for yet more criticism – three quarters think she is negotiating Britain’s exit badly, while just 14 percent say she is doing well.

8.35am update: Brexit white paper will “constrain” opportunities for the UK

Theresa May has been warned that her Brexit proposals would deny the UK the opportunity to join a new free trade agreement bringing together some of the world’s fastest growing economies.

Experts have said that her decision to seek a free trade deal with the EU on agricultural and manufactured goods would make membership to the new Comprehensive and Progressive Agreement for Trans-Pacific Partnership (CPTPP) unlikely.

This was signed earlier this year after US President Donald Trump pulled the plug on its TTP predecessor when he witdrew the US shortly after entering office in 2017.

The CPTPP is seen as a more affective alternative to forging separate trade deals with individual member states as it eliminates tariffs and quotas between member and involve mutual recognition of regulations and rules on cross-border investment.

In an essay for the Policy Exchange think tank, former Australian ambassador to the World Trade Organisation Geoff Raby warned that the Chequers deal would limit the UK’s participation.

He wrote: “By aligning UK policy to EU policy on agriculture and manufactured goods, the white paper will constrain the opportunities that the UK has to pursue an independent trade policy.

“Without being able to participate fully in the agricultural and manufactured goods dimension it is most unlikely that the UK would able to join, but if it did it would not be able to get the full benefits of the CPTPP.”

8:18am update: May heads to Austria for crunch talks

Theresa May is in Austria today in the latest round of talks as she attempts to win support for her Brexit blueprint.

The Prime Minister and her husband Philip will then spent a week in Italy on holiday before she returns to work at Downing Street.

EU leaders are also due to meet in Salzburg on September 20 for an informal summit that could be used to discuss Brexit developments.