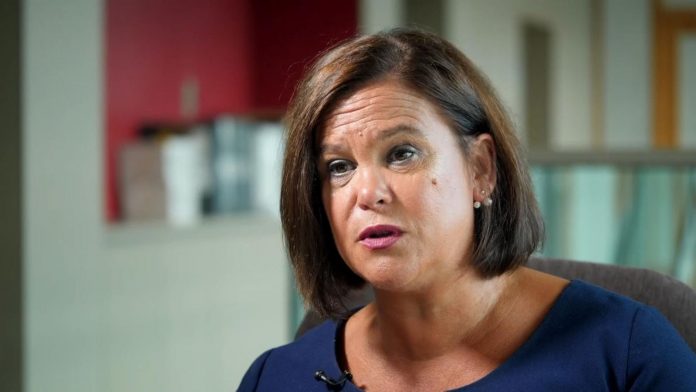 She told Sky News that Tory in-fighting over the issue had demonstrated their “utter indifference to Ireland.”

Ms McDonald accused Boris Johnson in particular of being “deliberately provocative” and “grossly irresponsible” about the peace process.

She said: “I think their statements make very clear their utter indifference to Ireland, their entire lack of appreciation of what happened on this island and their role in it, their utter ignorance in terms of the peace process.

“Their utterances, certainly in the case of Mr Johnson, have been provocative, one has to imagine deliberately provocative.

“Any notion that the Good Friday Agreement has served its purpose and should be put through the political shredder is grossly irresponsible,” she added.

Ms McDonald, who succeeded Gerry Adams as Sinn Fein president six months ago, believes Brexit, among other issues, will lead to a referendum on Irish unity.

She said: “Brexit, the changing demographic, the fact that the in-built permanent Unionist majority upon which partition was based and the northern state was founded is now gone.

“And above all, for our purposes, there is now a surge right across Ireland for social change, for modernity, for progress.

“That’s a very positive sentiment that’s not orange or green exclusively but that actually affords us a platform for a very necessary debate as to what Ireland looks like now and where we’re going over the next five to 10 years,” she added.

Sinn Fein believes some Tories are deliberately ignoring the potential implications of a hard border.

But Ms McDonald rejects any suggestion that her party is exaggerating the challenges to push their own unity agenda.

She said: “Brexit is not of our making. We didn’t want Brexit. In fact, the people in the north of Ireland voted against Brexit. They voted to remain.

“Brexit is a very peculiarly British and English construct that we are now to have, according to the Tories, foisted upon us.

“They seem to think that they can say ‘we are leaving’ and then unilaterally coerce the north of Ireland out of the European Union and rupture and sunder the economy and social life on this island and they have absolutely no right to do that,” she added.