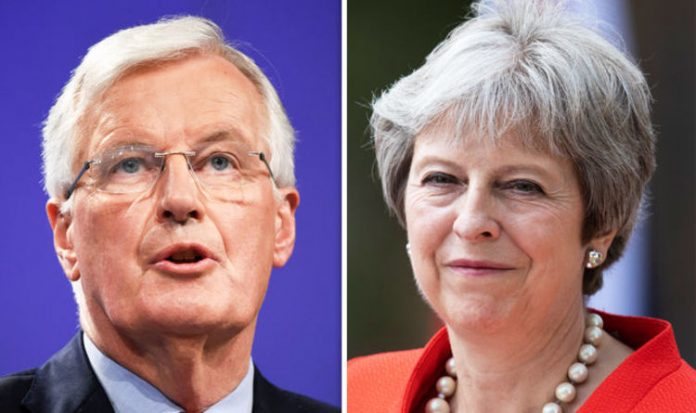 Michel Barnier, the EU’s top Brexit negotiator, has yet to agree to a deal giving EU firms unfettered access to the Square Mile.

But UK officials have warned the Frenchman that European investors will suffer if the City is refused a bespoke Brexit deal.

In a tit-for-tat response, EU-based firms could lose access to the City, putting thousands of European investment funds under threat.

Mr Barnier’s hardline Brexit stance is said to have softened after the apparent threat was issued at a recent meeting in Brussels.

But a Government source insisted: “This was not intended as a threat.

“We wanted to set out what both sides could lose if we don’t get a good deal, and it was received in that spirit.”

Another Whitehall insider accused Mr Barnier of “holding on to an uncompromising position until he’s given direction from Berlin to say otherwise”.

The UK is currently the largest market for investment services in Europe.

Nicolas Mackel, the chief executive of Luxembourg for Finance, said European firms were facing up to the prospect of losing access to the City.

“Everybody had been working on the assumption you had to set up UK funds if you want to sell to the UK.”

He told the Times: “At last, the British lion has begun to roar. Now imagine if it threatened to bite.

“I absolutely welcome this move and the public will too. It’s high time we toughened our stance.

“It’s time we tried every ploy we have to ensure we get the best deal for taxpayers as this will affect Britons for generations to come.”

Theresa May’s Brexit White Paper calls for “mutual recognition” of regulatory standards for financial service between the UK and EU.

But uncertainty over the UK’s departure from the bloc has sparked fears of an exodus of jobs from the City post-Brexit.

A Treasury spokesman said it was committed to reaching “a pragmatic new arrangement for financial services after we leave the EU”.

Stephen Jones, the head of lobby group UK Finance, said he was “encouraged” to see the UK and EU “making progress on discussions over future market access”.

He said an agreement between both sides would be “crucial for our shared financial stability”.