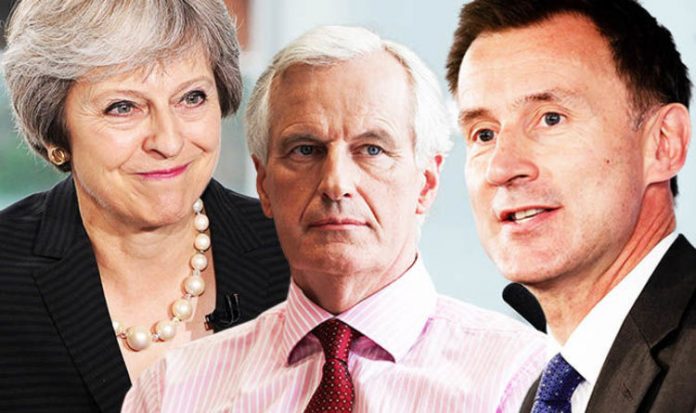 Foreign Secretary Jeremy Hunt issued his appeal as he warned the UK leaving the European Union next March without an agreement, damaging businesses and jobs on both sides of the Channel, was growing more likely “by the day”.

Mr Hunt was in Paris for talks with his French opposite number, Jean-Yves Le Drian, on defence and security issues.

Separately it emerged that Mr Macron has asked Theresa May to join him for talks this Friday at the French President’s glamorous official summer holiday retreat in the south of France.

The meeting raises British hopes that EU leaders are getting frustrated with Brussels’ inflexible attitude to the UK’s Brexit proposals and want instead to hear from Mrs May in person.

However France has also been taking a hardline stance so far, with active steps to lure City of London financial jobs to Paris.

The EU Commission is negotiating with Britain on behalf of the other 27 member states but fears are growing in European capitals that slow progress means talks will run out of time for a deal to be made and ratified by next March.

Mr Hunt’s comments also appear to chime with Brexiteers’ demands for Britain to highlight the dangers to EU economies, not just the UK, of a no-deal Brexit.

The Foreign Secretary, who will tomorrow meet his Austrian opposite number, said failure to strike agreement with the UK would causes damage on both sides, “if Brexit goes wrong”.


The probability of no deal is increasing by the day until we see a change of approach from the European Commission who have this view that they just need to wait and Britain will blink.

He repeated warnings he issued last week in Berlin that the EU’s current approach could destroy “relations and trust” between Britain and European countries.

He told the London Evening Standard: “The probability of no deal is increasing by the day until we see a change of approach from the European Commission who have this view that they just need to wait and Britain will blink.

“There is real chance of no deal by accident. Everyone is assuming ‘no, no, no, this will never happen’. Well, actually, it could.

“France and Germany have to send a strong signal to the Commission that we need to negotiate a pragmatic and sensible outcome that protects jobs on both sides of the Channel because for every job lost in the UK, there will be jobs lost in Europe as well if Brexit goes wrong.

“Probably the City of London, as the financier of European business, is the central point to make here. If it became harder for European businesses to access finance, that is far from trivial.

“The City itself would find a way to thrive, whatever the outcome of the Brexit negotiations … if it became a low-tax, low-regulation, offshoot fully outside the EU.

“But for European businesses the impact would be profound.”

He insisted the Cabinet was “united and clear” about what it wanted from Brexit for Britain, which was in Europe’s interests as well.

He defended the decision to seek to stay close to the EU, because it was “the biggest single market in the world, right on our doorstep”.

Earlier, Mr Hunt admitted that he originally wanted to stay in the EU, but that Brexit was “not a problem for me because it’s a democratic decision” by its people.”

Speaking in both French and English to the France Inter radio station, he added: “What worries me now is the real risk of a Brexit without agreement, by accident, because we the English Government propose a solution but I believe there are those in France who are waiting for a change of line from Great Britain that won’t come.

“A Brexit without agreement will be a tragedy for Europe – difficult economically, but we will find a way to prosper.”

Underlining the current dangers in the world, particularly Russian aggression, Mr Hunt added: “France has stood shoulder to shoulder with Britain on those kinds of issues.

“I think our responsibility to the safety and security of the world, is to preserve and develop our friendship with France, not to by accident break this friendship, that’s the last thing we want”.

He also repeated the warning he issued last week that “if we end up with no deal, the only person rejoicing will be Vladimir Putin”.

Mrs May, who is now holidaying in Italy with husband Philip, will head on Friday to Fort de Brégançon on the Riverera, the Elysée Palace announced.

Mr Macron has asked the PM for discussions and dinner.

The building, on a rocky island linked by a causeway to the Mediterranean coast near Toulon, was turned by Charles de Gaulle into his official summer residence in 1968.

Mr Macron and his wife Brigitte – who is 25 years his senior – are spending the summer there.

They have been criticised for plans to build a swimming pool there, at taxpayers’ expense.

Previous leaders have complained about people looking and taking photos of them sunbathing and swimming from the residence’s private beach, and the pool is designed to give privacy.

Mr Hunt’s comments were welcomed by Brexit-backing Conservative MP Andrew Percy, who has urged his party to get behind Mrs May’s latest proposals or risk getting a Jeremy Corbyn government and “Brexit in name only”.

“At some point the other side in these negotiations has got to realise that there are economic consequences for all if there is no agreement.

“Most people, on both sides, recognise that we’ve got to have a deal, which will involve compromises on both sides, which delivers on the referendum but also makes sure we remain close to our biggest trading partner.

“It is time that elected politicians such as the leaders of France and Germany stand up for the people against the unelected, automaton bureaucrats in Brussels.

“This is why we have elected governments, because they try to do things in the interests of their people.

“Too many people in Brussels are all about trying to protect and preserve the ‘European dream’ at all costs, even to the economic disbenefit of the people on both sides of the Channel.”