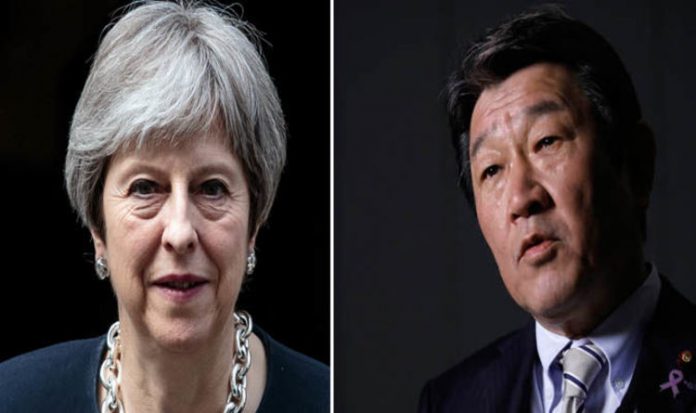 But Japanese minister Toshimitsu Motegi said Tokyo would “spare no efforts to support the UK” in joining CPTPP in a meeting with Dr Fox on his trip to Japan.

Mr Motegi said: “I’d like to welcome your country’s expression of interest in acceding to TPP11.

“Your expression of interest is indeed a great encouragement to our efforts to attach importance to the free-trade system based on rules, and to fight against protectionism.

“Japan will not spare any effort to support the UK, including providing relevant information, and acting as an intermediary to you in relation to other TPP member countries.”

He said: “We have been very impressed by Prime Minister Abe’s leadership of the TPP11.

“We think that it has enormous importance that goes beyond the economic importance to regional and global strategic importance, and we see both the UK’s potential accession to CPTPP, and the enhancement of the EU-Japan EPA into a new and stronger relationship, as being the basis of our economic co-operation.

“And we think that the world’s third biggest economy and the world’s fifth biggest economy – where we share so much of a similar outlook, not least on the need to maintain an open, liberal, free-trading system based on international rules – make us ideal partners for the years ahead.”

The Japanese government’s support stands in contrast to a warning from Australia’s former ambassador to the World Trade Organisation, Geoff Raby, who said the Chequers deal would limit the UK’s participation.

Mrs May’s plans to seek a free trade deal with the EU on agricultural and manufactured goods would make CPTPP membership unlikely, he said in an essay for the Policy Exchange think tank, pointing out that Japan experienced heavy resistance from its agriculture sector during its negotiations.

The CPTPP is a new free trade agreement bringing together 11 of the world’s fastest-growing economies, including Australia, Canada, Japan, Malaysia, Mexico and Singapore.

Japan accounts for nearly half of the CPTPP’s GDP, and is the UK’s fifth largest trading partner with total trade worth £28 billion – up by nearly 15% in 2017.

CPTPP members accounted for £82 billion of UK trade in 2016, more than the Netherlands, France or China.

Eliminating tariffs and quotas between members and involving mutual recognition of regulations and rules on cross-border investment, CPTPP is seen as a swifter and more effective alternative to forging separate trade deals with individual member states.