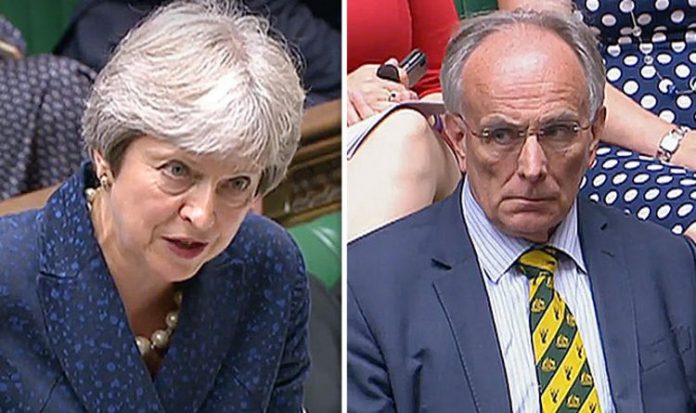 Peter Bone claimed activists in his constituency refused to campaign for the Conservative Party who felt “betrayed” by Mrs May’s Brexit policy.

He said: “On Saturday mornings I lead the listening team in Wellingborough. We have an hours meeting when we talk about national and local politics and then we go out and campaign for two hours.

“This week, the activists were so disappointed with what had happened at Chequers, they said they were betrayed, and they asked ‘why do we go out each and every Saturday to support the Conservative Party, get MPs elected’.

“And, for the first time in over 10 years, that group refused to go out and campaign. What would the Prime Minister say to them?”

Prime Minister Theresa May replied: “Can I say to my honourable friend, first of all, that I am very sorry that his activists did not feel able to go out and campaign.

“I would hope they would campaign for their excellent Member of Parliament and be willing to support him on the doorsteps.

“This is not a betrayal. We will end free movement. We will end the jurisdiction of the European Court of Justice.

“We will stop sending vast sums of money to the European Union every year.

“I believe that is what people voted for when they voted to leave and we will deliver in faith with the British people.”

The Prime Minister set out in the House of Commons her Brexit model which the cabinet had agreed on last Friday after the crunch Chequers meeting.

She said: “On Friday at Chequers our cabinet agreed a comprehensive and ambitious proposal that provides a responsible and credible basis for regressing negotiations with the EU towards a new relationship after we leave on the 29 March next year.

“It is a proposal that will take back control of our borders, our money and our laws.

“But do so in a way that protects jobs, allows us to strike new trade deals through an independent trade policy, and keeps people safe and our union together.”