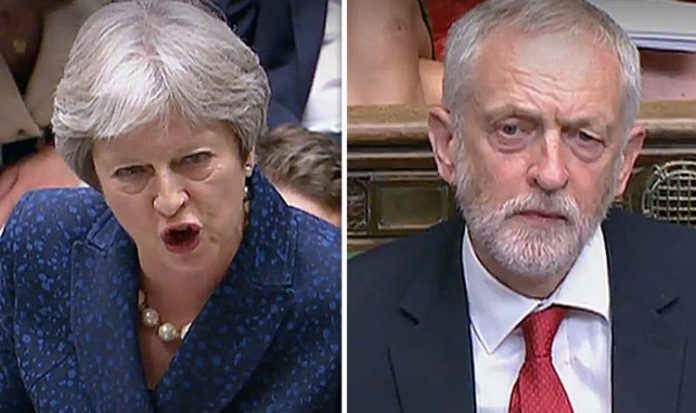 Theresa May took a swipe at Jeremy Corbyn in the House of Commons after the Labour Party leader mocked the resignations of Mr Johnson and Mr Davis.

The Prime Minister said: “At the very beginning of his response. The right honourable gentlemen thanked me for early sight of my statement, it’s just a pity he obviously didn’t bother to read it.

“He says that this is two years on, this is the right honourable gentlemen that said immediately after the referendum decision, in 2016 that we should have triggered Article 50 immediately, with no preparation whatsoever.

“He talks about delivery, well I might remind him that we delivered the joint report in December, we delivered the implementation plan in March, and now we stand ready to deliver on Brexit for the British people with the negotiations that we are about to enter into.

“He talks about resignations. Can I just remind him, I think he has had 103 resignations from his frontbench.

“So I will take no lectures from the right honourable gentleman.

Prime Minister Theresa May set out in the House of Commons her Brexit model which the cabinet had agreed on last Friday after the crunch Chequers meeting.

She said: “On Friday at Chequers our cabinet agreed a comprehensive and ambitious proposal that provides a responsible and credible basis for regressing negotiations with the EU towards a new relationship after we leave on the 29 March next year.

“It is a proposal that will take back control of our borders, our money and our laws.

“But do so in a way that protects jobs, allows us to strike new trade deals through an independent trade policy, and keeps people safe and our union together.”

The former Brexit Secretary Mr Davis told the BBC’s Today programme that he was “very clear” on Friday that he did not back Mrs May’s Brexit plan.

Mr Davis said: “When we debated this at Cabinet on Friday my opening remark to Theresa was ‘Prime Minister, as you know I’m going to be the odd-man-out in this’. She knew this because I had written to her earlier in the week.

“Cabinet collective responsibility applied so I didn’t say anything thereafter. That was because I was thinking about the consequences.

“I took the view at the time this was not the best strategy, that there were better strategies available – we have been establishing them. I thought it would be a risk at least of delivering a poor outcome. I was very clear on Friday and I took two days to think through some, for me, very important decisions.”