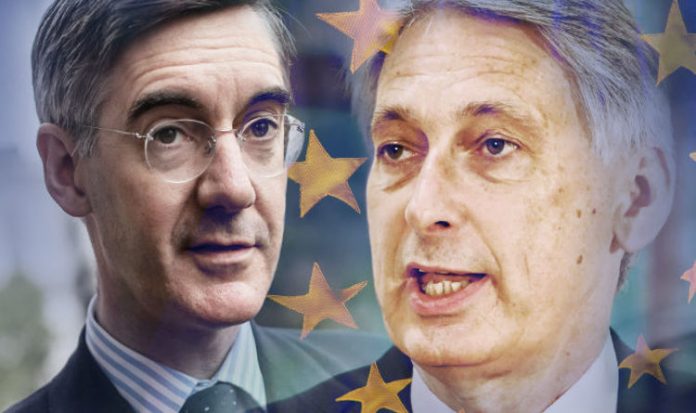 The Chancellor joined International Monetary Fund chief Christine Lagarde yesterday at the launch of a report raising alarm about possible “substantial costs” for the UK economy in the event of the country quitting the EU without a trade agreement.

He also suggested a breakdown in the Brussels talks could reverse the “progress” made by the British economy in recovering from the financial crisis a decade ago.

But Brexit supporters were dismayed to see the Chancellor closely aligning himself with the IMF following the organisation’s recession warnings during the EU referendum campaign.

Senior Tory MP Jacob Rees-Mogg, chairman of the European Research Group of MPs, said: “The Chancellor continues to do his best to obstruct Brexit and has been consistently wrong.

“It is hardly newsworthy as the needle has now been stuck for so long.”

Stewart Jackson, a former chief-of-staff at the Department for Exiting the EU urged Theresa May to sack the Chancellor for his latest doom-mongering outburst.

“Not that 10 Downing Street would take my advice, but surely it is high time to give Brexit atmosphere hoover Philip Hammond the chop,” he said.

At a news conference at the Treasury, Mr Hammond said the IMF’s annual assessment of the outlook for the UK economy showed the importance of securing a Brexit deal.

“We are at a critical juncture for the UK economy. We must lock in the economic progress that we have made,” he said.

“As we leave the EU we must secure a close and enduring partnership with our European neighbours and we must heed the clear warnings of the IMF and others of the significant costs not reaching a deal with the EU will have for British jobs and British prosperity.

“Despite the contingency actions we are taking, leaving without a deal would put at risk the substantial progress the British people have made over the last 10 years.”

He added: “As talks intensify, I am confident we will reach agreement on the withdrawal agreement and the future framework this autumn, but we must of course continue to prepare for all scenarios.

“A no-deal scenario remains unlikely but it is not impossible.”

Ms Lagarde said a no-deal Brexit would lead to “dire consequences”, adding: “It would inevitably have consequences in terms of reduced growth, an increase in the deficit and a depreciation of the currency.

“In relatively short order it would mean a reduction in the size of the economy.”

Brexit supporters were dismayed to see the Chancellor closely aligning himself with the IMF (Image: GETTY)

The remarks from the Chancellor and the IMF managing director followed a report from the Economists for Free Trade pressure group, backed by Mr Rees-Mogg and other Eurosceptic Tories, arguing that Britain had nothing to fear from a “no-deal” Brexit.

Mrs May’s officials declined to echo Mr Hammond’s warning yesterday. Asked about the Chancellor’s comments on the IMF predictions, a Downing Street spokesman said: “The Prime Minister believes that Britain’s best days are still ahead of it and we have plans in place to allow us to succeed in all scenarios.”

In the latest of its regular assessments of the state of Britain’s finances, the IMF said that all likely Brexit scenarios would “entail costs for the UK economy”.

A no-deal departure could lead to “a significantly worse outcome”, the report said.

While new trade agreements made possible by EU withdrawal “could eventually pare some of these losses for the UK”, any such deals are “unlikely to bring sufficient benefits to offset the costs imposed by leaving the EU”, the international economic think tank said.

In report, the IMF urged the Government and financial institutions in the UK to prepare policies to “safeguard macroeconomic and financial stability” in the case of a chaotic Brexit.

The report said the Treasury and Bank of England should be prepared for the possibility of “sharp declines in sterling and other asset prices” and the Bank should be ready to act to ensure the financial system has adequate liquidity.

Plans should also be in place for a possible “significant” increase in interest charged on Government debt.

Ministers may have to use the flexibility available to them to boost economic activity by bringing forward major infrastructure projects.

But any easing of fiscal policy – for example by cutting interest rates to stimulate the economy – would have to be temporary and introduced as part of a “credible” longer-term plan to keep debt under control.

The IMF warned that tax rises and spending cuts may be needed if Brexit inflicts lasting harm on the economy, saying: “A permanent shock to output would require an eventual adjustment of revenues or spending.”

Even if an orderly Brexit is achieved, with a trade deal covering goods and some services, UK growth can be expected to remain “moderate” over the next few years, said the IMF.

Its forecast of around 1.5% growth in GDP for 2018 and 2019 under this scenario was virtually unchanged from its predictions in July.

The UK has already fallen from the top to near the bottom of G7 growth tables in the wake of the 2016 referendum, with business uncertainty holding back investment and the fall in the value of the pound feeding through to higher inflation and slower growth in incomes and consumption, said the report.

The IMF noted that “fundamental questions”, particularly on the Northern Irish border, remain to be answered in order to secure a smooth Brexit.

And it warned: “Resolving these issues is critical to avoid a no-deal Brexit on World Trade Organisation terms that would entail substantial costs for the UK economy – and to a lesser extent the EU economies – particularly if it were to occur in a disorderly fashion.”

The report warned that the UK still faces a “daunting” task to prepare for Brexit and is unlikely to have completed the task by departure day on March 29 2019 even with “the most determined efforts”.

“This risks serious disruptions without an implementation period in place,” said the IMF.

“Co-ordination and co-operation between the EU and UK on priority issues, such as ensuring air traffic continues to flow, would be to the benefit of both parties.”

The IMF urged the Bank of England to exercise caution over any further increases in the base rate of interest, following the hike from 0.25% to 0.5% in November last year and to 0.75% in August.

“Further withdrawal of monetary stimulus should await clear confirmation of a durable rise in domestic cost pressures,” said the report.

While the inflationary impact from the Brexit vote should fade over time, the tight labour market can be expected to force up wages, fuelling further price rises, said the IMF.

The organisation said it was “critical” for the UK continue its strategy of “fiscal consolidation” to reduce overall debt levels by keeping a tight hand on the purse-strings.