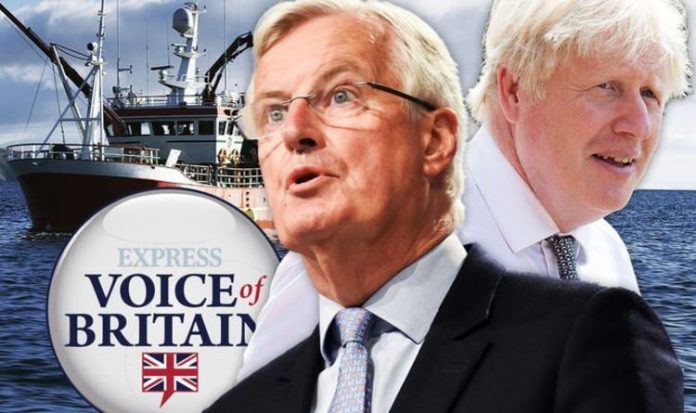 Michel Barnier is set to meet with fisheries ministers in order to determine whether they will drop their demands for continued access to the UK’s rich fishing waters. Despite the UK having left the EU, countries such as France, have refused to drop their demands in order to facilitate a free trade agreement. Due to this, Express.co.uk asked readers in our latest exclusive poll, “EU states demand access to UK waters – should Boris give up on talks?”

In response, 9,594 out of 11,327 people insisted the Prime Minister should walk away from talks.

Commenting on the poll, one person said: “It’s either UK fishing rules or NOWT.

“Scrap your fishing boats and get another way of living.”

A second said: “No deal is the only way forward.

“As a sovereign nation, the EU cannot dictate anymore – they just don’t get it – the big bully days are over.”

A third said: “Give up Boris, they will never agree to what we want.

“Enough is enough, for God’s sake we’ve fiddled around for four years, walk away now!”

The aspect of fisheries has been one of the main areas of divergence between the sides throughout the negotiations.

Although the UK is now an independent nation, the EU has demanded continued access to British waters, similar to what they have experienced through the Common Fisheries Policy.

UK officials, however, have insisted Britain must be able to determine access and quotas to our waters post-Brexit.

While not having an agreement with the EU over fisheries, the UK Government has drawn up a Fisheries Bill to set out how the UK will govern its waters.

Under the bill, EU ships will no longer have automatic access to UK waters, while the four devolved nations must produce statements on how they aim to achieve the proposals set out in the legislation.

The legislation is currently in the final stages of the Commons process and will have its report stage on October 13.

Despite the lack of an agreement with the EU, last week, the UK Government announced a fisheries deal with Norway.

The landmark agreement will now allow the two nations to hold annual negotiations to determine the level of access and fishing quotas.