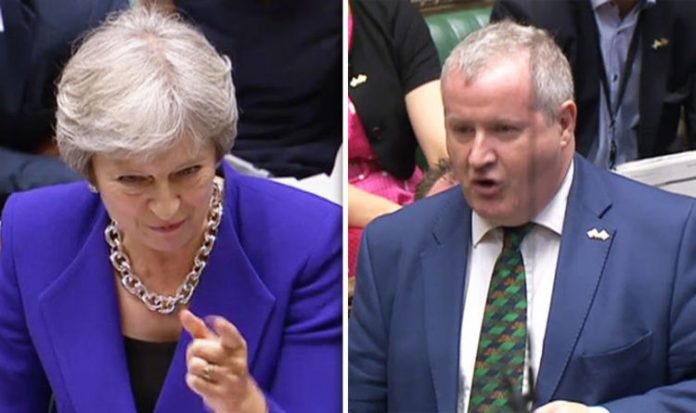 Ian Blackford had argued that the Government’s Brexit strategy was putting “narrow party interest before that of the country”.

Theresa May said: “He talks about putting a political party’s interest ahead of that of the country.

“I think the SNP should really think about what they are doing when they promote the independence of Scotland which is clearly against the interests of the country.”

The comments were in response to Mr Blackford, who said: “This week the Prime Minister caved into her right-wing Brexiteers, undermining her negotiating position with the EU.

“In her attempt to hold together her fractured party she has managed to unite the country against this Government.

“The Prime Minister has put her narrow party interest before that of the country. Is it not the case that the events of this week make a ‘no deal’ much more likely.”

First Minister Sturgeon in May argued that a new Scottish independence referendum was “much bigger case than Brexit.”

She also claimed that some aspects of the Brexit debate had added fuel and strengthened her plans to see Scotland break away from the UK.

The SNP threat comes as Mrs May fights off pressure from Brexit hardliners in her party voicing concerns over the Government’s latest Brexit blueprint.

Her proposal would see Britain maintain its close trading links with Brussels through a free trade area administered by a common rulebook.

But Brexiteers fear the common rulebook would leave the country under EU rule without any say on regulations after British politicians lose their institutional seats after withdrawal.

Sir Bill Cash slated the White Paper proposal, expressing concerns the UK would become a vassal state and be forced to accept regulations in the same manner as the 1972 European Communities Act.

Former cabinet minister, Thersa Villiers, also criticised the White Paper, and said: “The Chequers agreement indicated that Parliament will have the right to reject future EU rules, but how will they ever exercise that power when the White Paper commits to an upfront choice to commit by treaty to ongoing harmonisation of the relevant EU rules?”

The 98-page blueprint set out details for the UK’s future relationship with the EU when it was finally published earlier today.

The white paper was expected to be published last month but was delayed after the consistent disagreement between cabinet ministers.

The document detailed the government’s plans for the future economic and security partnership with the EU, as well as other cooperative and institutional arrangements once Britain leaves the bloc.